Indonesia has lots of interesting places waiting to be explored. Ranging from sea and beach attractions, mountains, lakes, forests and many others. Those can be found easily in this “Emerald of the Equator”. While many families visiting Indonesia never stray beyond Bali, the rest of the archipelago offers kid-friendly adventure and culture in equal measure.

A family trip to Indonesia would be a genuine holiday of a lifetime. With 17,000 islands to choose from, there is so much for the whole family to explore. Here are our guide for top family holiday destinations in Indonesia. 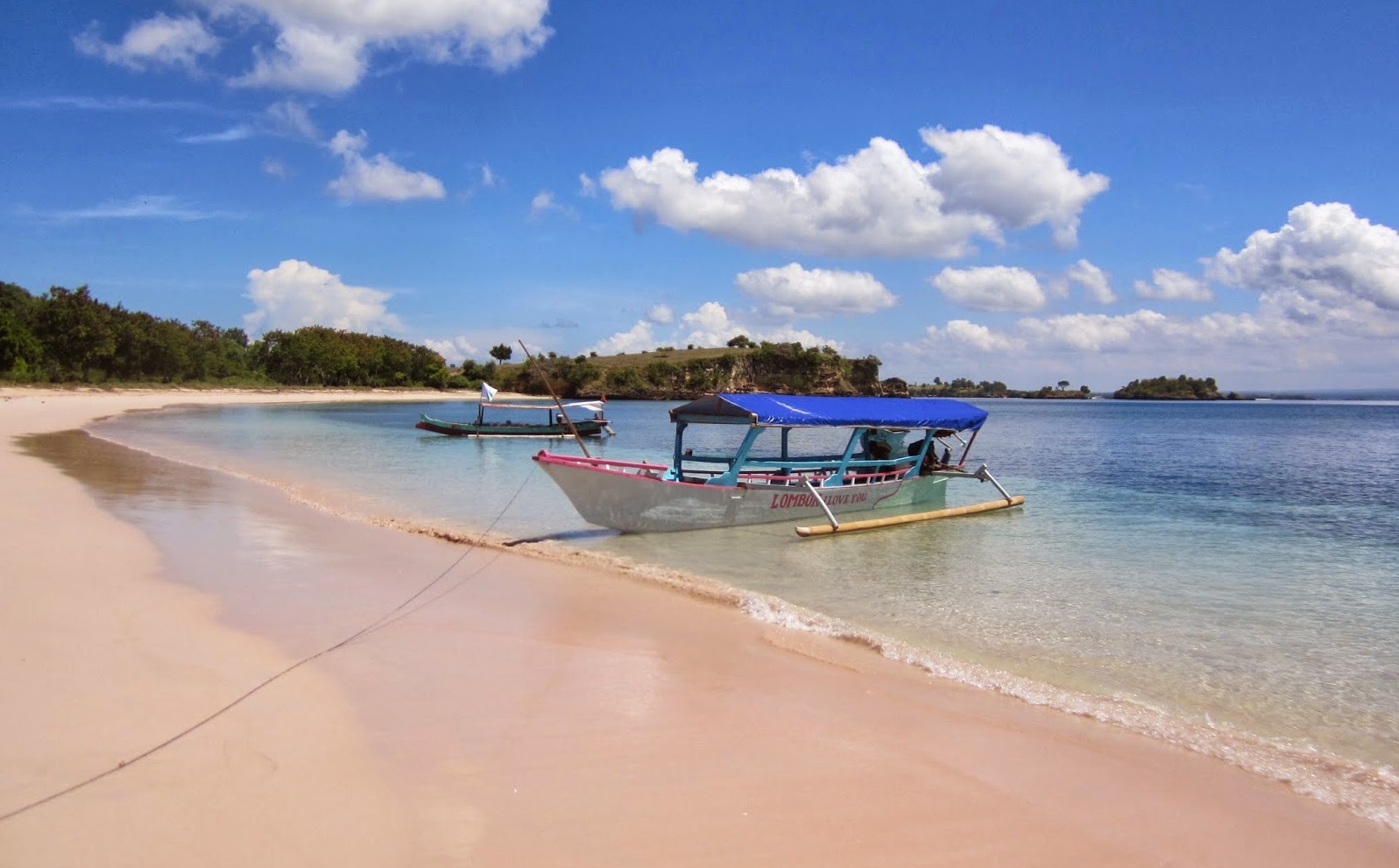 Lombok is often touted as the ‘next Bali’. Same as Bali, this island is also very friendly for family travelers. Lombok is home to some of Indonesia’s best beaches and waterfalls, including the unique Pink Beach or also known as “Tangsi Beach”. Lombok is also the gateway to the Gili Islands; a group of three small islands home to diverse marine life.

Lombok offers a variety of natural and cultural beauty that attracts many tourists to come, from beaches, small islands, waterfalls, mountains, hills to its traditional villages. They spread throughout the island of Lombok with its own beauty and uniqueness. 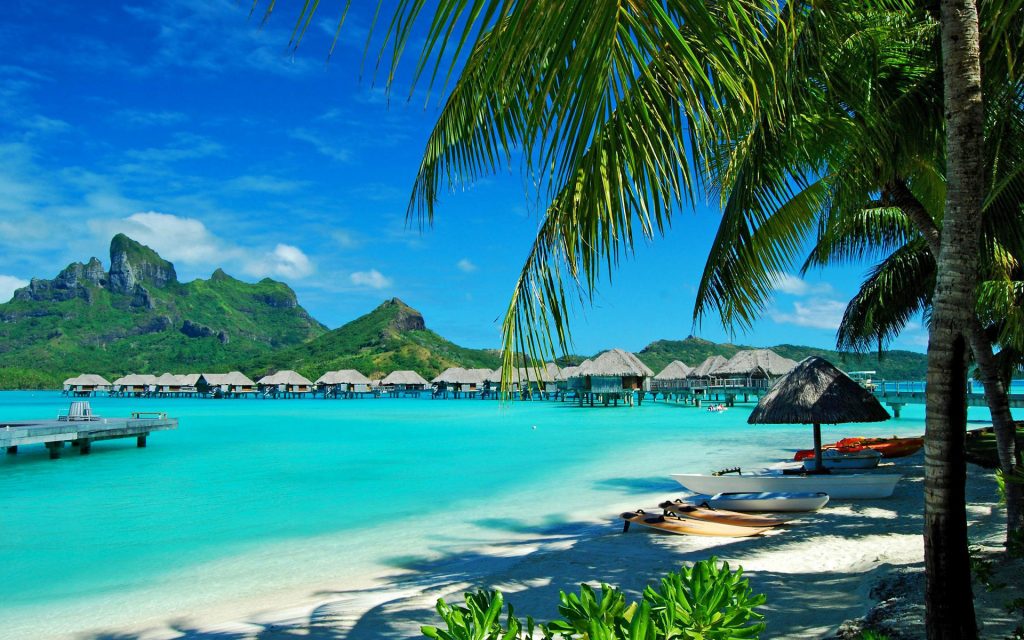 In Kepulauan Seribu you will find a different part of Jakarta which is away from the hustle and bustle of the Indonesia’s capital. On this island there is a tourist attraction called the Kepulauan Seribu National Park which is used also as a conservation zone.

In addition, Kepulauan Seribu Islands also have many beautiful islands which are very suitable for weekend getaway. Some of them are Kahyangan Island, Pabelokan Island, Angel Island, Onrust Island and many others. This place is a very suitable for diving, snorkeling and other water activities because of its clean water with white sand beach. 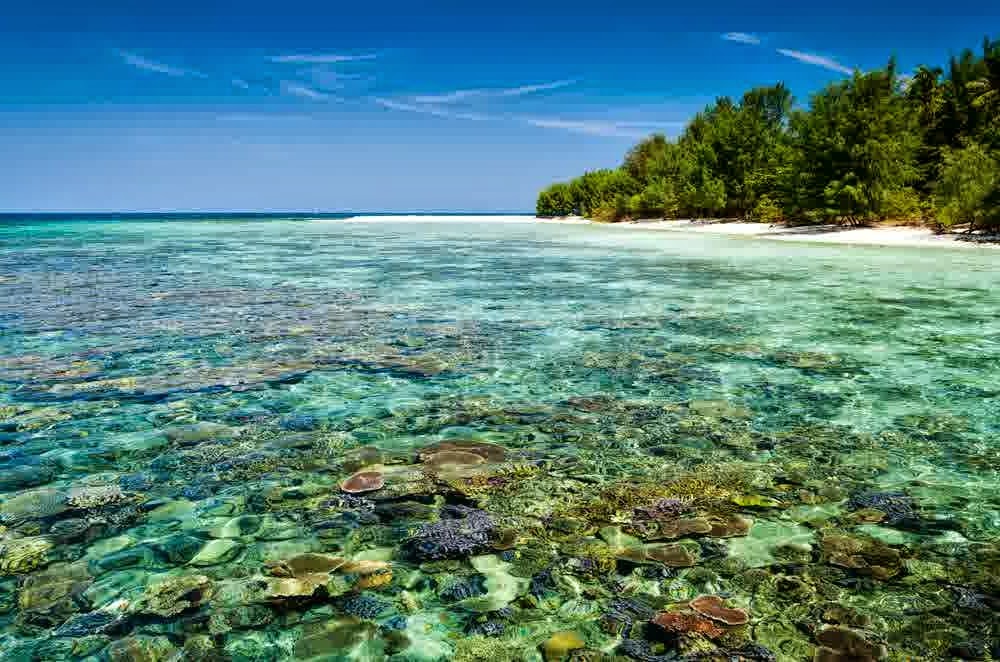 In the northern part of Central Java Province there is one interesting tourist spot which is visited by many tourists as a weekend getaway, not only for domestic, but also foreign tourists, called the Karimun Jawa Islands.

The island within the Jepara Regency is the most convenient point to enjoy the underwater paradise with 90 species of marine coral and 240 more species of beautiful fish. You can also enjoy the mangrove forest and see typical animals in this small island, which is also labelled as the Caribbean Island of Java, such as deer, apes, turtles, various species of birds and many others. Your vacation with family will be fun here.

East Java has one undeniably beautiful tourist attraction called the Bromo Tengger Semeru National Park. This tourist attraction which is located in 4 districts in East Java has many interesting objects. Some of them are Mount Bromo and Semeru, the sea of sand, Berbisik Beach, Madakaripura Waterfall, Ranu Pane (Lake), Ranu Kumbolo (Freshwater Lake) and many more.

The Gili Islands is one of tourist attractions visited by many tourists since the 1980s. Gili which is the hallmarks of Lombok consist of three islands, namely Gili Trawangan, Meno, and Air. Gili Trawangan is the largest and most visited island while Meno is the smallest island and a quiet place perfect for honeymoon vacation or family holiday.

Minimal air pollution, a simple way of life as well as its calm atmosphere make anyone who visit the island don’t want to leave. Remarkably, residents on this island prefer to use traditional transportation equipment such as wagon and rickshaw instead of using a motorbike. That’s why the air in this place is not much contaminated by pollution.

Ubud is about 25 km north of Denpasar City, Bali. Although it does not have beaches that is also one of Bali’s tourist attractions, Ubud offers a variety of natural beauty, cultural arts performances and exotic handicrafts. The name of Ubud is increasingly well-known throughout the world after “Eat, Pray & Love” Hollywood movie once filming here.

Ubud has also been included in the list of ten most friendly cities in the world according to the results of a survey conducted by a world travel magazine, Conde Nast Traveler. So, Ubud shall be a perfect place for family holiday. 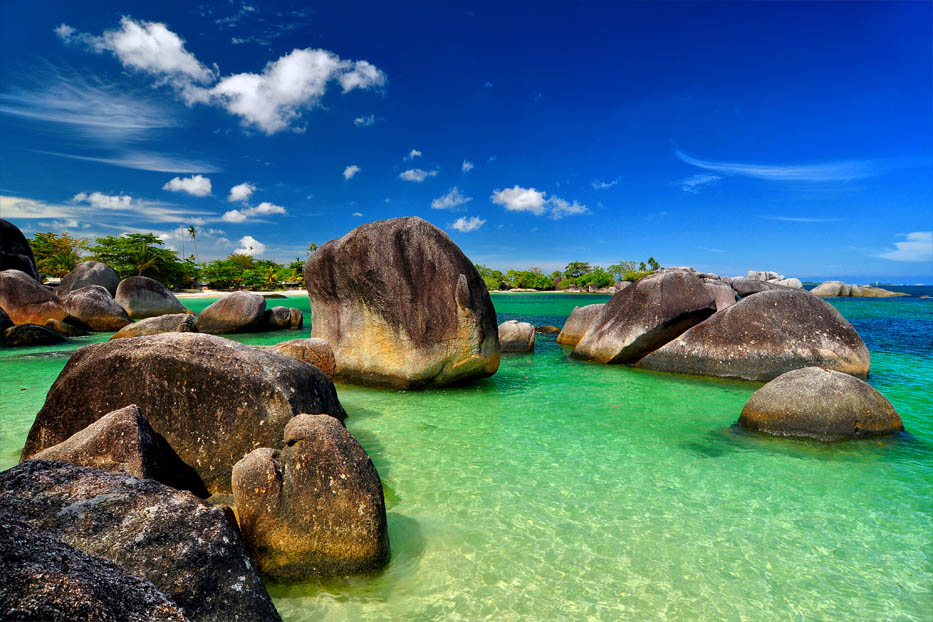 If playing water and swimming in the beach is your favorite family activities during vacation then Belitung can be your next destination to visit. Belitung is a regency (kabupaten) of Bangka Belitung Islands Province, Indonesia, with Tanjung Pandan as its capital.

Belitung is the right choice for family traveler to enjoy the beauty of the sea because of the close distance among the islands. There are many beautiful islands and beaches that you can enjoy there, such as Nyiur Melambai Beach, Lengkuas Beach, Tanjung Tinggi Beach, Pasir Island, Batu Berlayar Island and others. 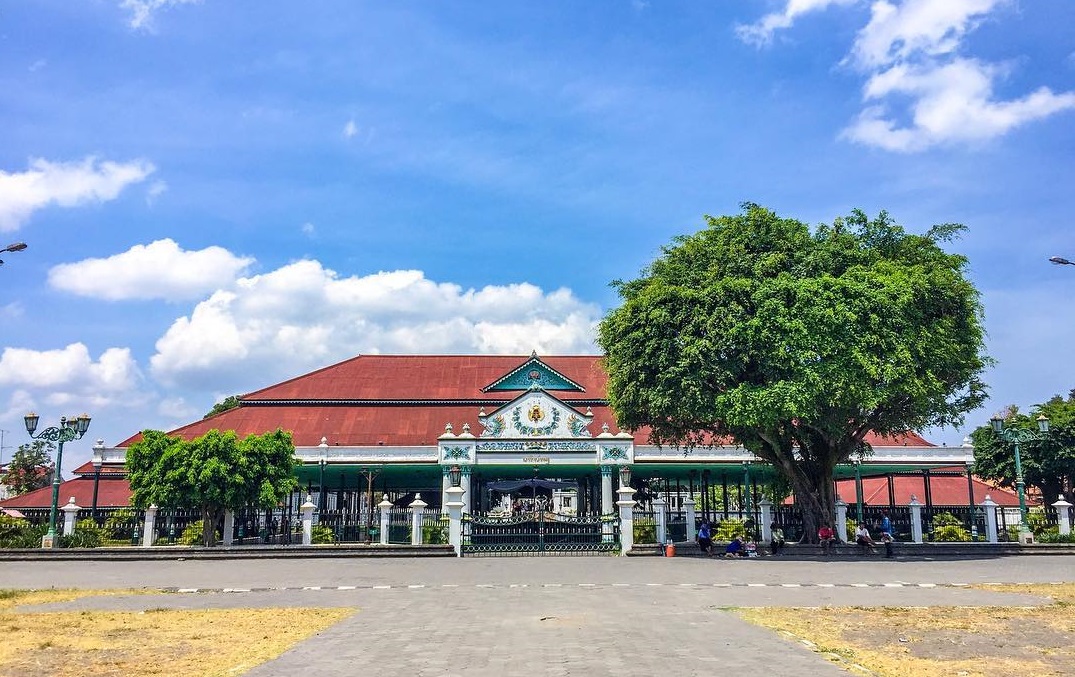 Family vacation to Yogyakarta, you will never run out of destinations. Starting from those that have become Yogyakarta icons such as the Palace of Yogyakarta, Taman Sari, Parangtritis, Prambanan Temple, Borobudur Temple and Malioboro to visiting other places that are sure to be fun for the kids such as Taman Pintar, Ullen Sentalu Museum and skating in Gumuk Pasir.

In addition, there are so many popular tourist spots that you need to try when visiting Yogyakarta such as the Pujon Kidul Village tour, Nglambor Beach, The World Landmarks Merapi Park and the Mangunan Pine Forest. Don’t miss the opportunity to taste a variety of Indonesia’s unique culinary of Jogja such as gudeg, mangut & bakpia. 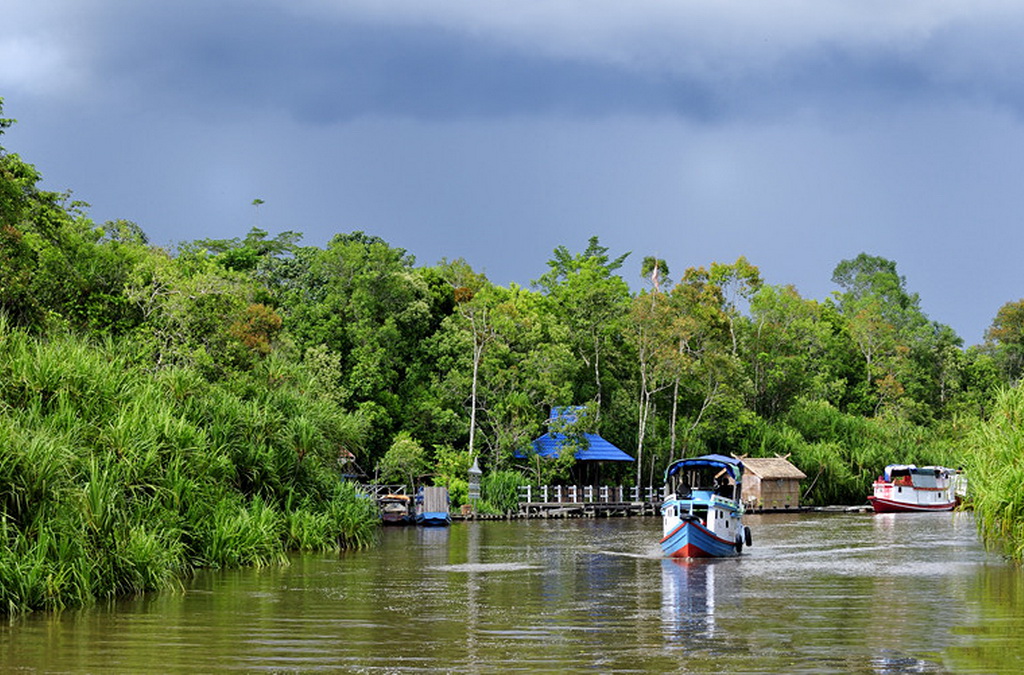 The opportunity to see Orangutan in the wild is one of the main reasons why people want to visit Borneo. The best way to do this is to book trip package to the Tanjung Puting National Park. There are several orangutan feeding and rescue centers within the park, that give you the chance to get an up-close look at the animals in their natural habitat.

Additional activities you and your family can do here are sailing through a long river on board of Klotok Boat, trekking through the lush forest and overnight in a camp or resort in the middle of the jungle. 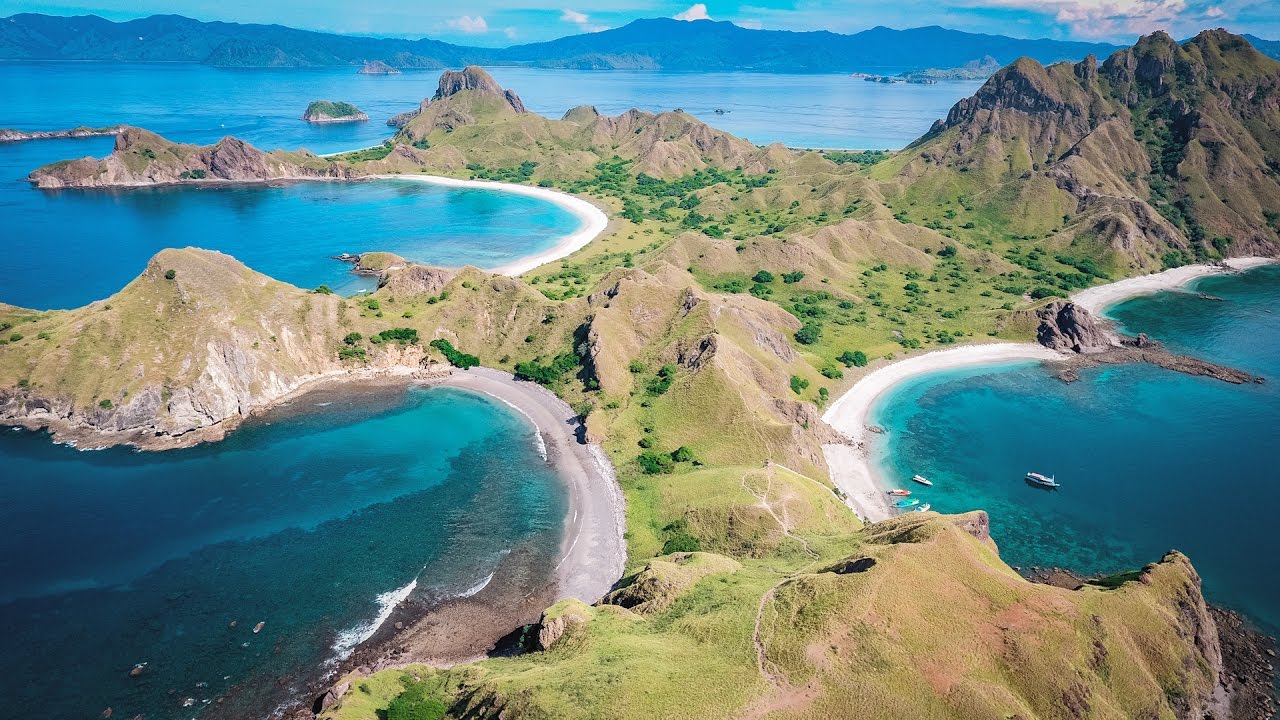 Flores interior itself is made up of a dramatic, volcanic landscape, broken up by patches of dense jungle, traditional villages and the Trans-Flores Highway which runs the length of the island from east to west. The harbour town of Labuan Bajo, the gateway to the Komodo National Park, is the most touristy part of the island and is home to several child-friendly resorts.