Explore the Many Wonders of Yogyakarta

Yogyakarta is the center of Javanese arts and culture, Yogyakarta (pronounced as ‘Jogjakarta’, or ‘Jog-ja’ for short) is a city with amazing culture and customs as rich as they were centuries ago. The city is governed independently by a traditional Sultanate system which differs from the rest of Indonesia.

Yogyakarta is known to be the soul of Indonesia, keeping the spirit in perfect balance and harmony. Contrary to larger cities, life in Yogyakarta is a lot more simple and laid back (with a mojority of students living there). The locals are friendly, the food is good and there’s an endless list of best places to go to. Throughout this article you’ll get a first glance of the many wonders of Yogyakarta.

So what are the best things to do?

We all know about the famous and well-known historical and cultural shrines such as the many temples left behind by ancient civilizations, but in fact Yogyakarta is a gold mine of astonishing natural landscapes that reminds you of mother nature’s greatness. So if you’re wondering where to go, here is the best that Yogyakarta has to offer. 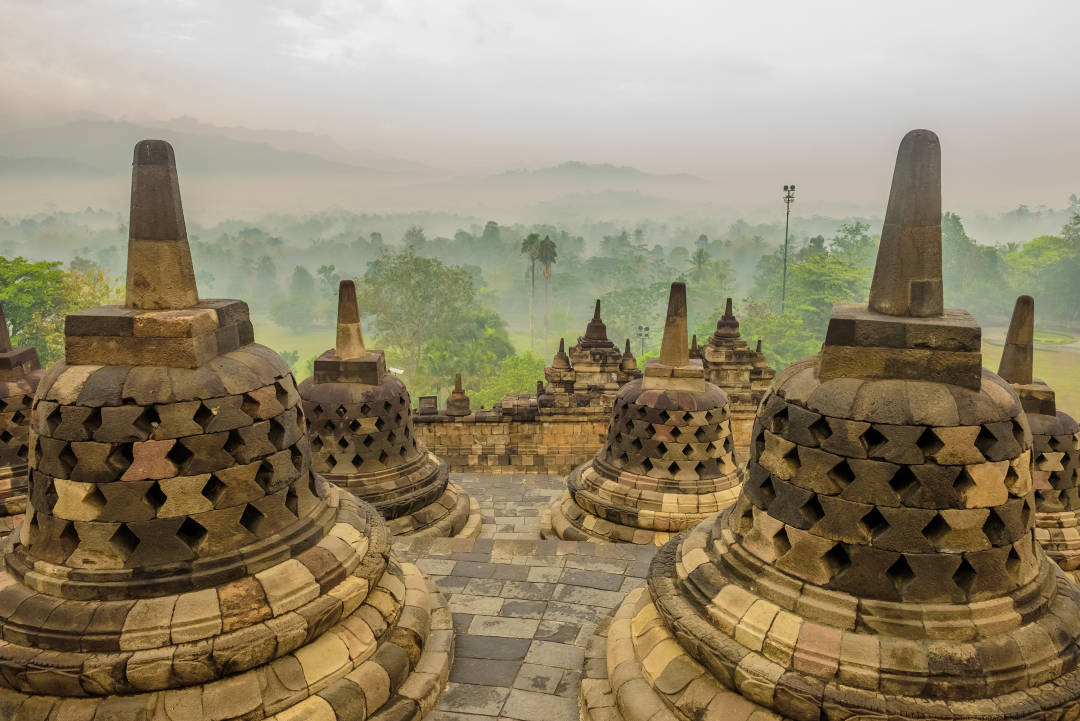 This 113 foot high pyramid is a bit of a Buddhist mystery. Built between the 8th and 9th centuries by the ruling Buddhist Cailendra dynasty, there is a great deal of confusion about the temple’s original purpose or name. Borobudur contains four main platforms with one large circular stupa at the top. At each level, smaller Buddhas sits  in circular rings. In the background, four volcanoes shroud Borobudur in mist (only one volcano is not active). The purple orange haze gives a stunning backdrop to the entire stone structure.

Prambanan temple is a UNESCO world heritage site consisting of 240 temples built by the subsequent ruling dynasty, the Hindu-led X. The temple site is dedicated to the expression of God as the Trimurti, or Brahma (Creator), Vishnu (Preserver) and Shiva (Destroyer), towering 47 meters high. In the evenings, you can catch the spectacular Ramayana ballet performance where over 200 dancers and musicians perform in open air, with the magnificent temple as the backdrop. 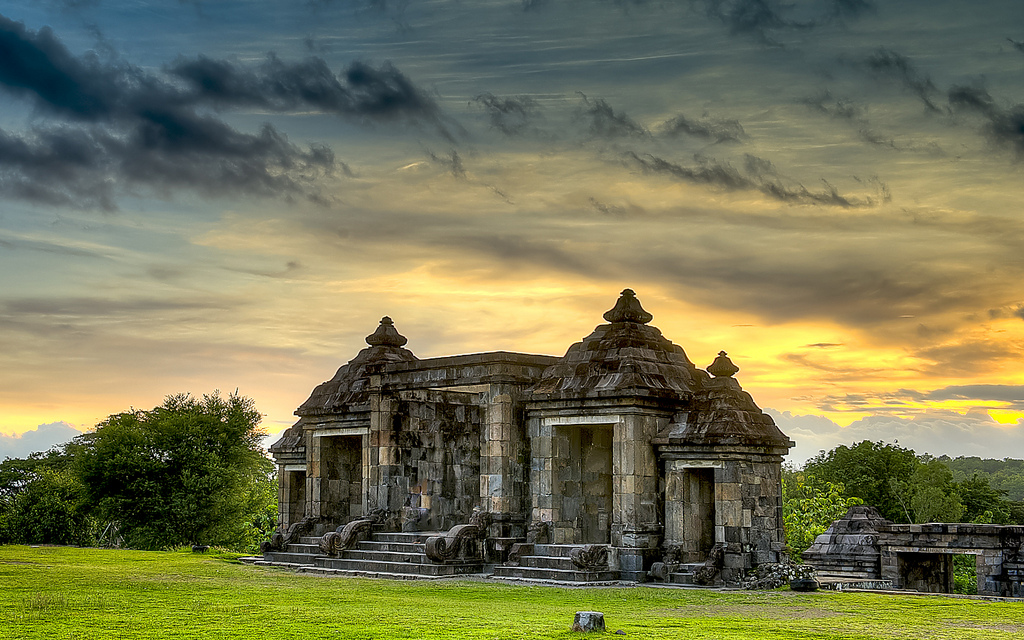 Ratu Boko is an archaeological site known to modern Javanese as Kraton Ratu Boko or Ratu Boko’s Palace. Ratu Boko is located on a plateau. The temple’s architecture is a mix of Buddhist and Hindus (as many of you know Indonesia used to be Hindu). This temple offers a great panoramic view and beautiful golden sunset that allows you to see Yogyakarta City and Prambanan Temple with Merapi Mountain as the background. 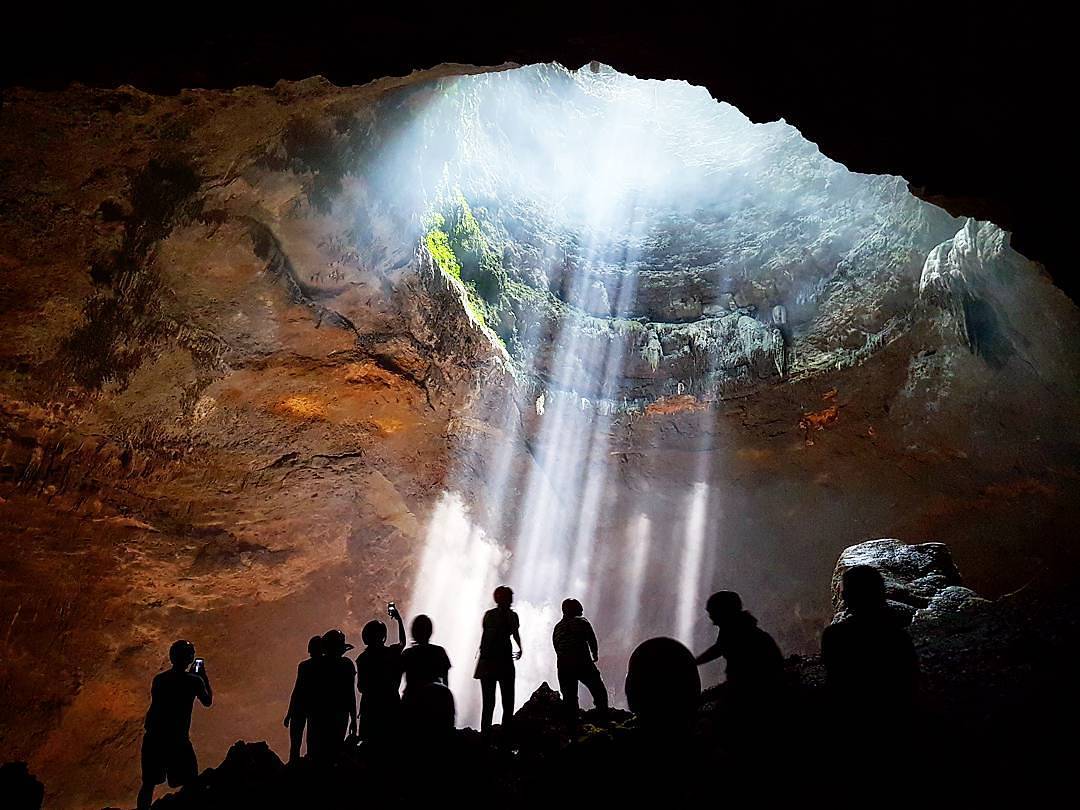 Goa Jomblang caves is one of the tourism highlights of Yogyakarta. The caves are located in Gunung Kidul, an hour drive from Yogyakarta. Jomblang Cave is famous for the streaming heavenly light that filled into the cave. The cave has formed when a forest collapsed due to an earthquake, forming a 200 meter hole in the ground. Light penetrates directly over the cave’s hole during early afternoon (2 pm). To get to the hole, you’ll be dropped through a rope and pulley system approximately 90 meters down. A pretty cool experience. 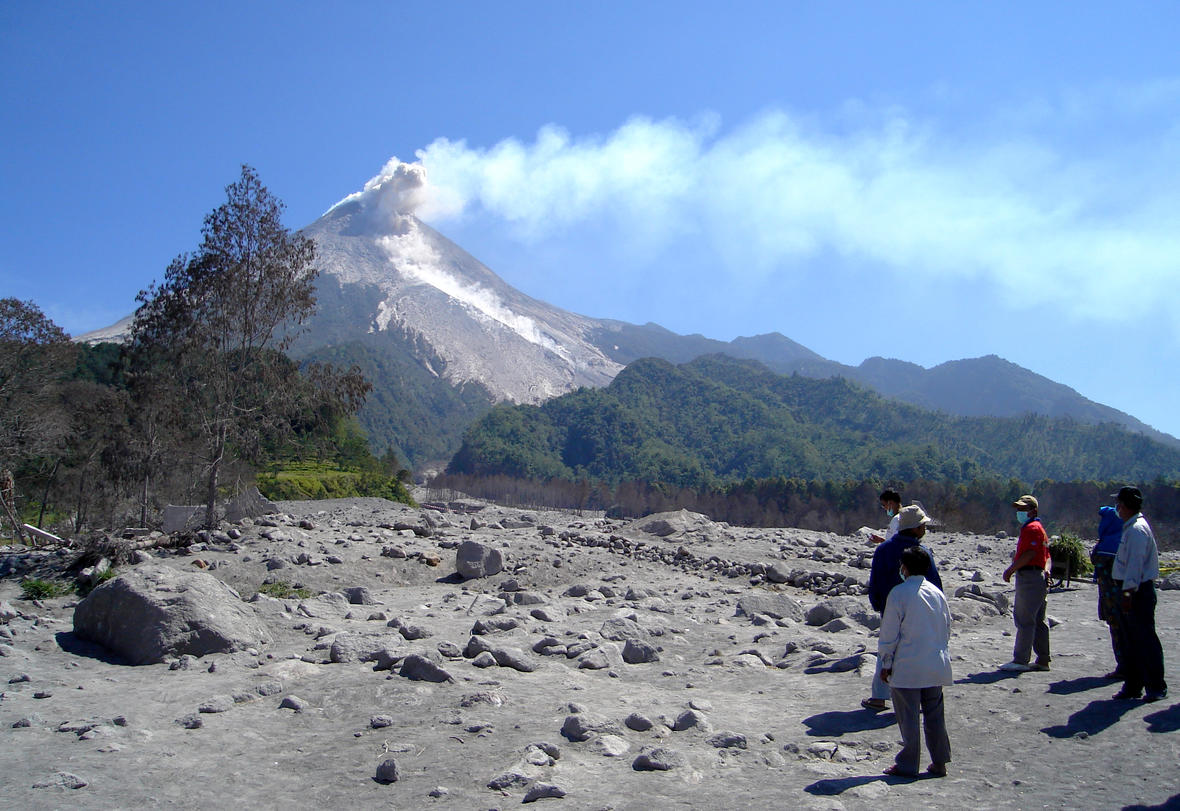 There are a lot of volcanoes around Yogyakarta to climb. The most famous (and dangerous since it is one of the most active volcanoes in Indonesia) to climb is Merapi. It’s a tough trek but really worth the hike, especially to witness the magnificent colorful sunrise. 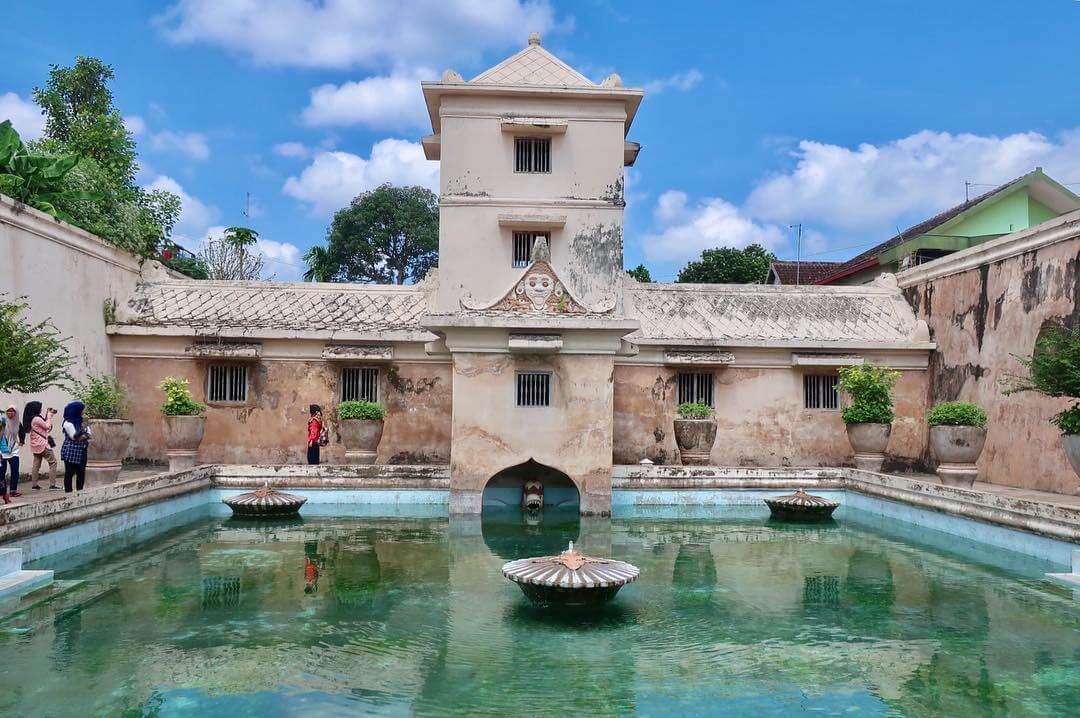 Taman Sari is an ancient garden chateau with an elaborate series of swimming pools. This palace was built by the Portuguese (when they briefly resided in Java) as a gift for the wives of Sultan Hamengku Buwono I. The castle was built in an architectural style loved by Yogyakarta’s ancient royalty and boasts not only a magnificent view but an eerie underground catacomb that is worth checking out! 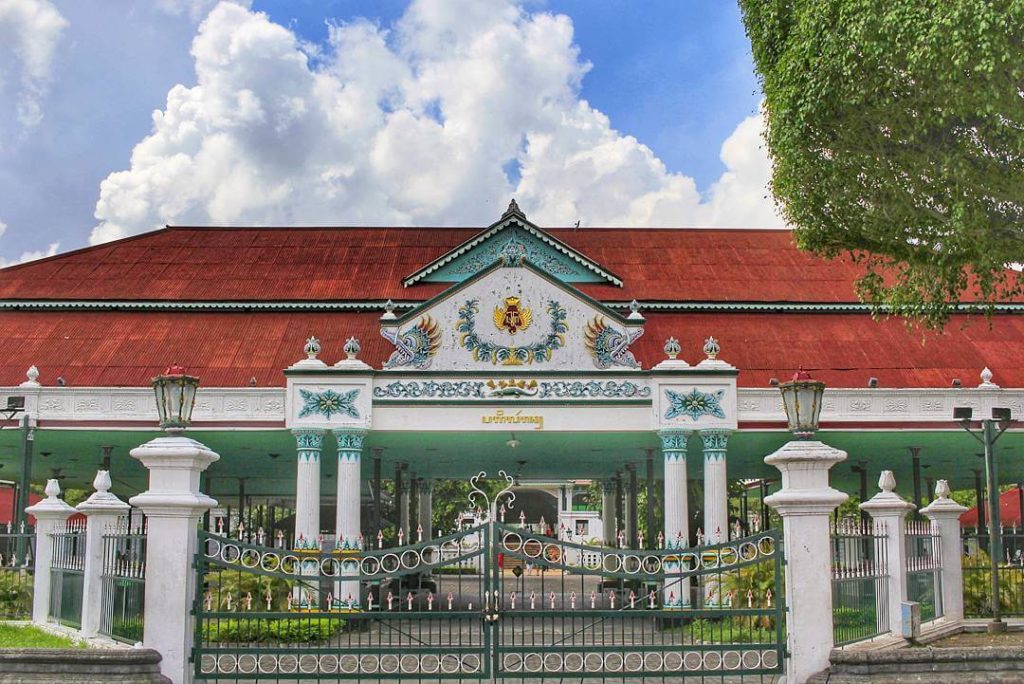 Kraton of Yogyakarta is the city’s palace complex and the main seat of the Sultan Yogyakarta and his family. It also serves as a cultural center with a museum for the Sultan’s artifacts. More of a walled mini city than a palace, this massive compound is home to 25,000 people and has its own industries, schools and shops. Distinctive features to note: the male and female dragon entrances, the European-influenced architecture, gifts from various European monarchs and sacred banyan trees. 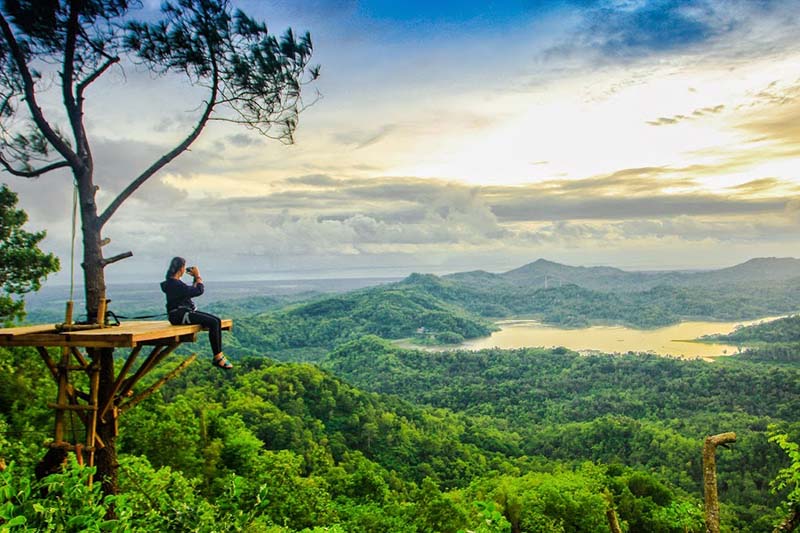 Kalibiru is a park organized by locals that has blown up on social media for it’s dream worthy landscape. The most distinctive feature is a small wooden platform overlooking the mountains and lush green forest below. Kalibiru is about a 1 – 2 hour drive west of the city, near the Menoreh mountain range. Interesting fact: the park was completely built by local citizens – previously the area had no greenery due to logging and palm oil clearing. 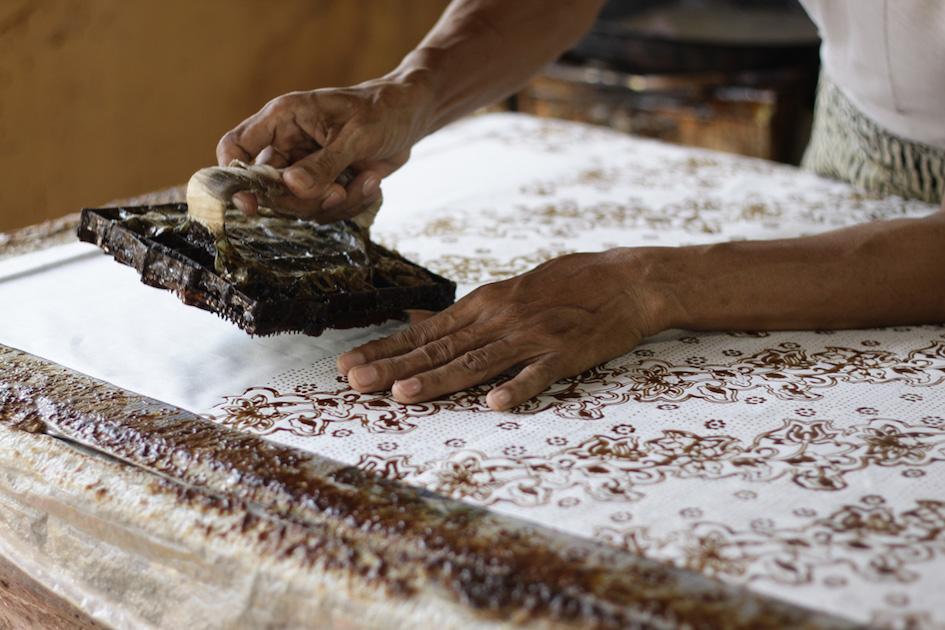 Traditional Indonesian fabric is a distinctive cloth with intricate batik dye. To make the cloth, wax-resistant dye is applied to the fabric dry by either drawing dots or lines using a spouted tool called the canting, or by printing with a copper stamp called the cap. It’s a bit of inverse process, as the wax is dye resistant, and allows the artisan to selectively color the cloth. Yogyakarta has a long history of making batik fabric and where the art form is the most highly developed. 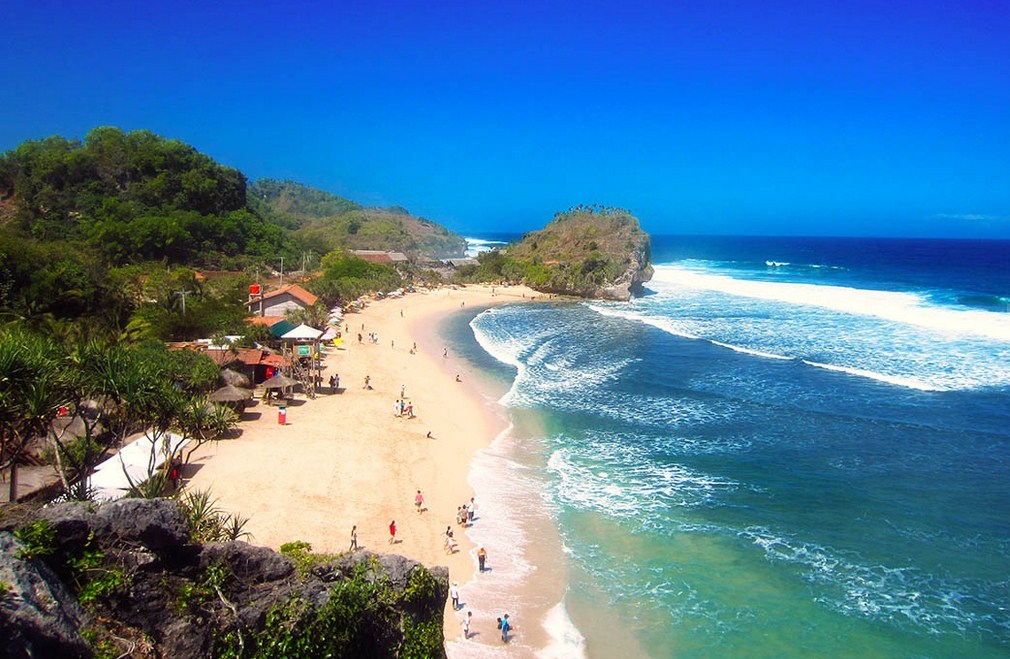 Many visitors to Yogyakarta won’t realize that it is actually located close to the Indian Ocean and actually the southern side of the city stretches along the coastline and consists of Indrayanti Beach. The strip of golden sand here is clean and you will also find a range of small Indonesian cafes and stalls set up along the coastline where you can get some simple noodle dishes as well as cool drinks and coconuts.

Go Rafting on the Progo River 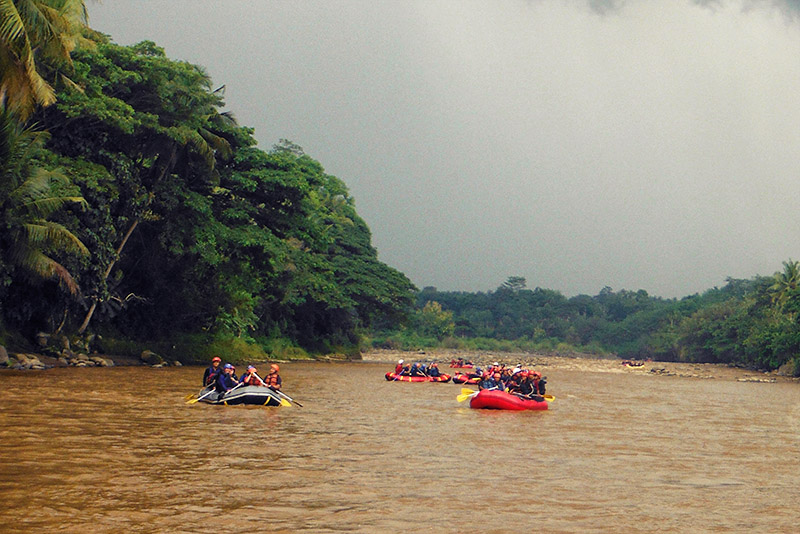 Take a trip to the pretty Progo River and rent a kayak and go rafting down the rapids. This is a somewhat an  unusual spot in Yogyakarta as it allows you to get out of the city without taking you too far away from the main action. The big highlight of drifting down the rapids is the chance to take in the lush flora and fauna from the vantage point of the water all while getting your adrenaline pumping. If you make it to the Progo River you can also combine a visit with the neighboring Elo River at the same time. 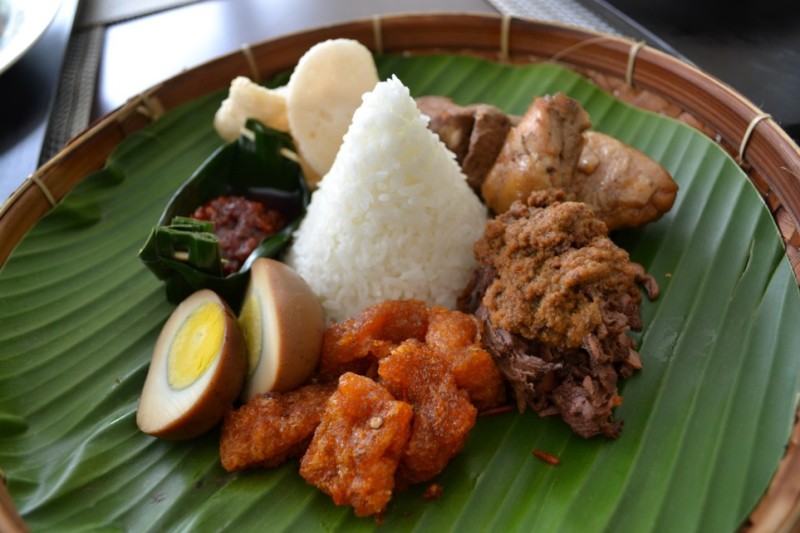 Yogyakarta is known for its famous food and the most famous of these is Gudeg. This basically consists of jackfruit which is boiled with coconut milk to form a kind of curry. It is served with rice and is not to be missed if you are in the city, and some of the best known places to find it include Bale Raos, Ibu Ageng and Gudeg Pawon which is located on Janturan Street. If you want to try a wider range of typical treats from Yogyakarta then you can also take a food tour and these have become increasingly popular in recent years.

Book now your trip to Yogyakarta :

Day Trip Tours in and around Jogjakarta