Because of its location on the equator, Indonesia has abundant natural wealth. Indonesia not only has beautiful tropical beaches, but also stunning mountains and lakes.

Are you bored going to the beach? You can make the lake as a new attraction for you. There are 2 types of lakes in Indonesia, which are the natural lakes and artificial lakes. Both of them offer beauty and uniqueness. Of the many lakes that exist, here is the list of 10 most beautiful lakes in Indonesia you can write down in the list of your next idealisk destination.

Lake Toba is the largest lake in Indonesia with a length of 100 km and a width of 30 km. Toba is one of the favorite tourist attractions in North Sumatra. Lake Toba was formed due to a huge volcanic eruption. This eruption produces a caldera which is then filled with water. One unique thing about this lake is that in the middle of the lake, which has a depth of 450 meters, there is an island called Samosir Island.

Until now there are not many tourists visit the Samosir Island yet, which has an area almost the same as Singapore, so the island is still very natural and thick with traditional culture. Samosir Island also has two lakes, which are the Lake Sidihoni and Lake Aek Natonang.

Samosir Island is inhabited by ancient Batak People. There are relics of ancient times such as stone graves and traditional villages on the island. Samosir is the right place for you who want to feel the peace of nature while learning about cultural diversity. 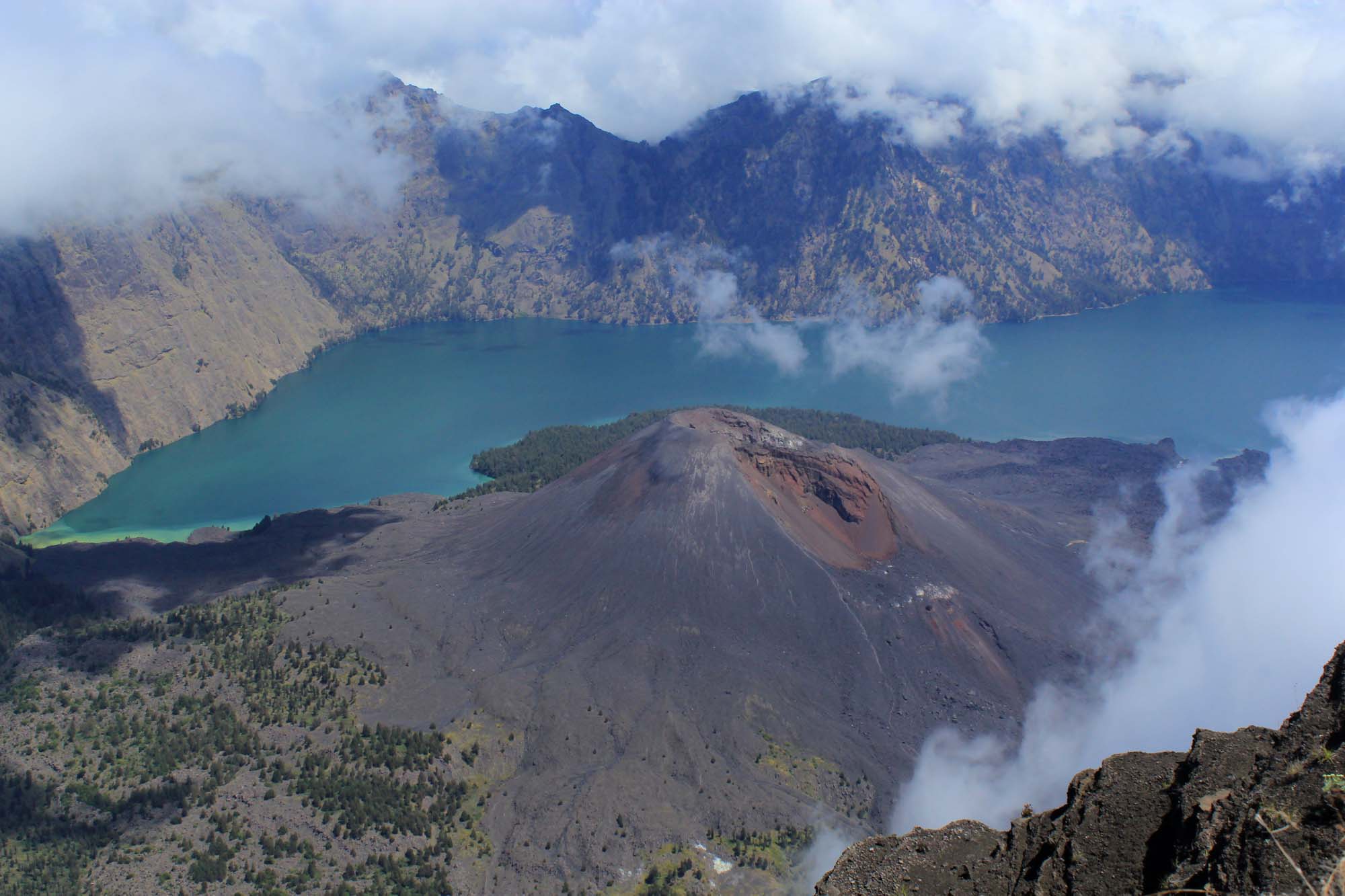 Segara Anak is a beautiful lake located in the crater of Mount Rinjani, precisely located in the village of Sembalun Lawang, Lombok Island, West Nusa Tenggara. The name Segara Anak was given because its blue water is reminiscent of the color of sea water. To reach one of the most beautiful lakes in Indonesia, you have to do trekking first because the lake is located at an altitude of 2,000 meters above sea level.

Aside from being an additional attraction for Mount Rinjani tourism, the lake is usually used as a resting place for climbers before continue their journey to the top of Mount Rinjani. Around this lake there are also hot springs that are believed can treat various diseases. 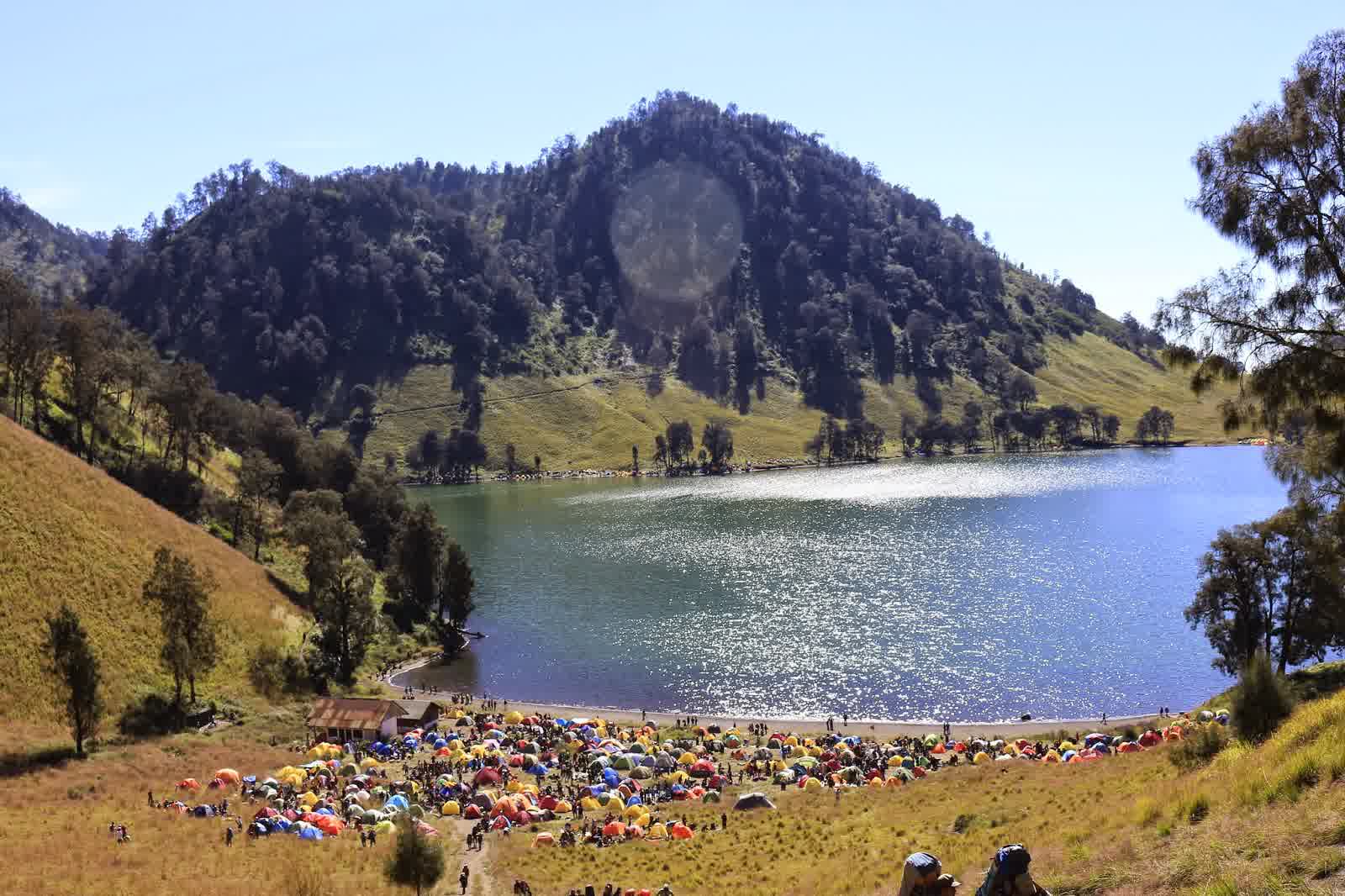 Ranu Kumbolo is another beautiful lake located at the foot of Mount Semeru. Its location is also part of Bromo Tengger Semeru National Park, between Lumajang Regency and Malang Regency, East Java Province. Ranu Kumbolo is often touted as a hidden paradise, because to reach this beautiful lake you have to do quite heavy trekking, especially for novice climbers.

But do not worry, because during the trip, you will see green views of pine trees along the beautiful hills. If you are lucky, you can see the clouds of smoke from the top of Mount Semeru. The scenery you should not miss when you are here is the view of the sunrise that appears on the sidelines of the green hills, and when the night come you can enjoy the beautiful sparkling galaxies in the night sky with naked eye. 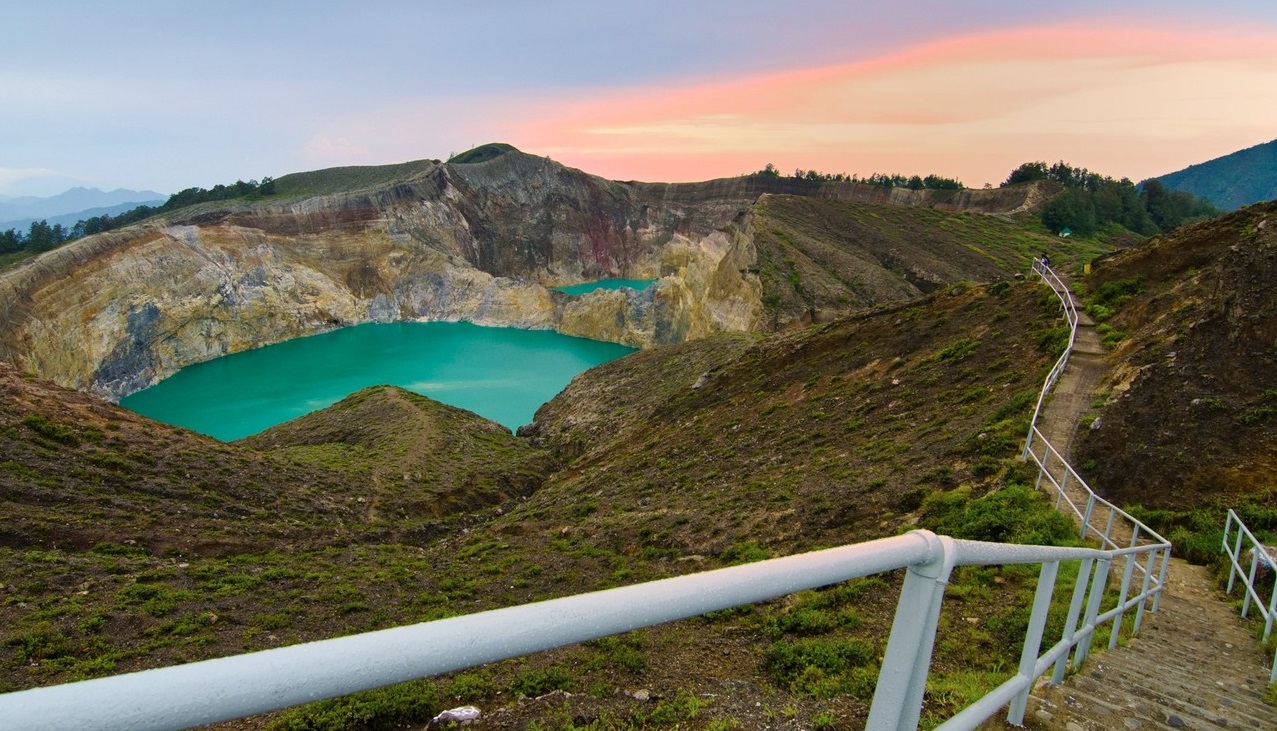 Lake Kelimutu is located in the Kelimutu National Park area, about 45 km from Ende City. Kelimutu consists of three lakes located at the peak of Mount Kelimutu. Each of these lakes has a different water color. Each of them
has a different meaning and it is believed that local people have magical powers.

To reach this beautiful lake, you can start the journey from the city of Moni which is a backpacker basecamp. During the trip to the lake, you will be treated to a beautiful view. The most western lake is named Tiwu Ata Mbupu, the lake in the middle is called Tiwu Nuwa Muri Koo Fai, and the easternmost one is Tiwu Ata Polo.

The lake is often shrouded in fog, so the best time to visit this most beautiful lake in Indonesia is early morning, so you can watch the spectacular sunrise views. 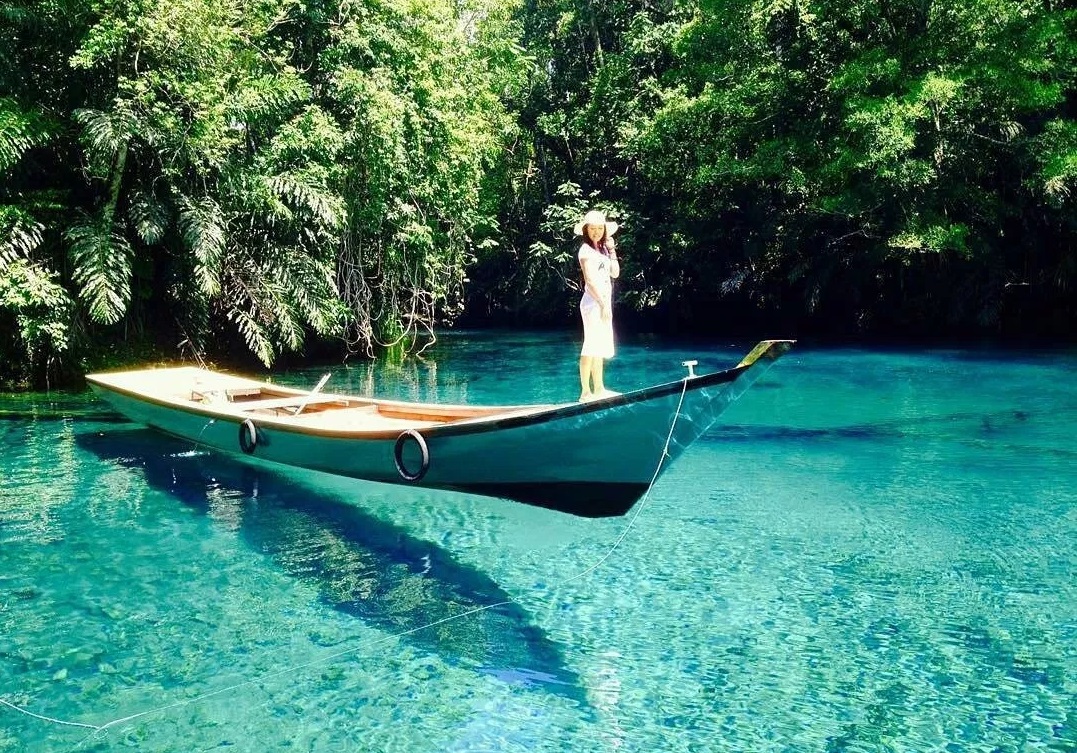 The Labuan Cermin Lake is located in Labuan Kelambu Village, Biduk-Biduk District, East Kalimantan. The lake, which can be reached by land for about 6 to 7 hours from Tanjung Redeb, is called as Labuan Cermin Lake because the water is very clear. Because the depth of this charming lake is only 3 meters, you can enjoy the beauty of the coral contained at the bottom of the lake with naked eye. Fantastic isn’t?

Labuan Cermin is also known as the two-flavor lake because the water is a combination of brine and freshwater where at the top of the lake consists of salt water, and the bottom is freshwater. Interestingly, the color of the lake water is also similar to the gradation of sea water, which are dark blue, light blue, turquoise, and white. Swimming, snorkeling, or diving are water activities that you can do here. 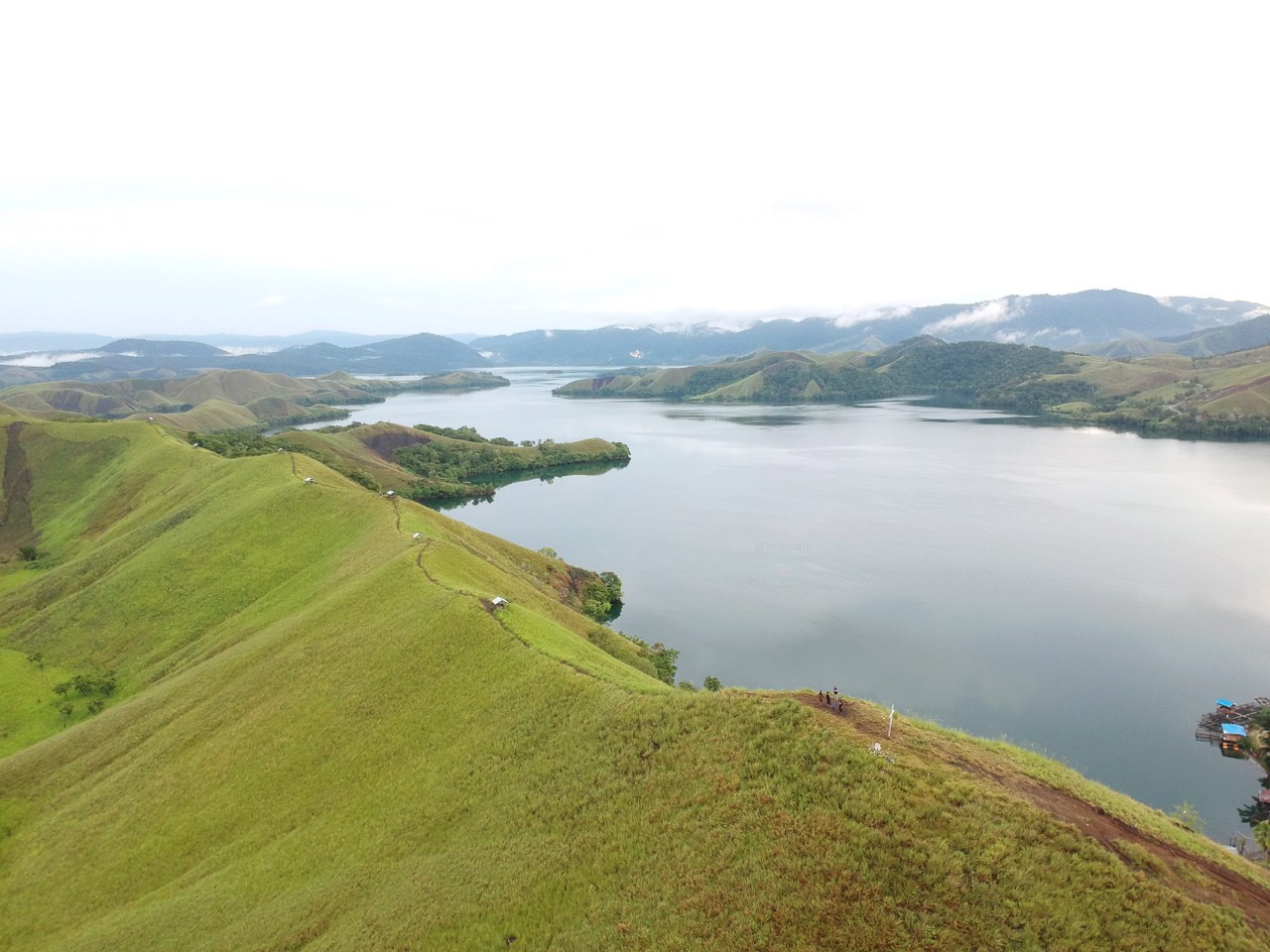 Papua not only has the exotic Raja Ampat, there is also a lake here which is one of the most beautiful lakes in Indonesia, called the Lake Sentani. It is located on the slopes of the Cycloop Nature Reserve with a height of 75 meters above sea level. Here, there are 22 islands that are still inhabited by indigenous tribes, namely the Sentani Tribe. Lake Sentani can be reached by road from Jayapura City with a distance of 50 km.

Lake Sentani is famous for its diversity of distinctive marine life such as cork fish, sentani sharks and saw sharks. Visiting this Papua’s lake is most appropriate during the middle of the year, because at that time the Lake Sentani Festival is held. You will not only see the beautiful view of the lake and the surrounding mountains, but the diversity of unique cultures of Papua as well. 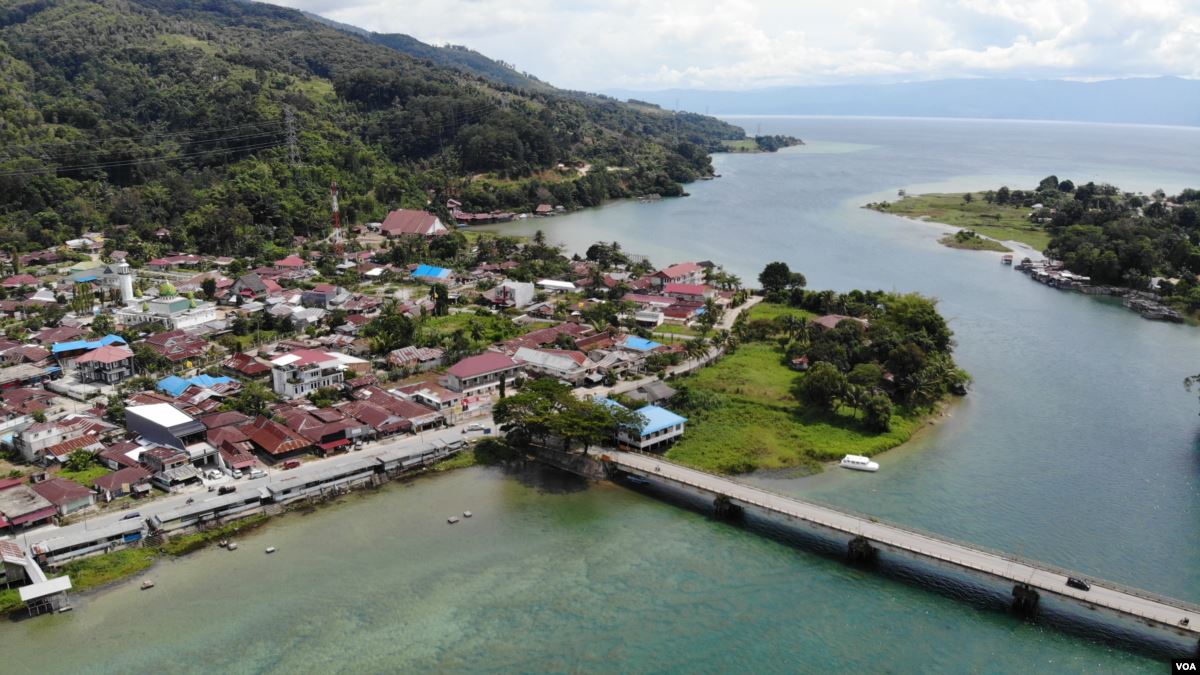 Lake Poso is located in Poso Regency, Central Sulawesi. With a length of 32 km and a width of 16 km, this pretty lake is the third largest lake in Indonesia. Together with Lake Toba, which is famous throughout the world, Poso with depth reaches 195 meters is also included in the list of the most beautiful lakes in the world.

Poso is quite a unique lake, because the edge of the lake is surrounded by white sand, making it look like a cool white sandy beach. Here you can explore the lake by motorboat while enjoying the activities of local people who are fishing and fish farming. You can also visit Bancea Nature Tourism near the lake. It is the largest orchid conservation site in Indonesia. 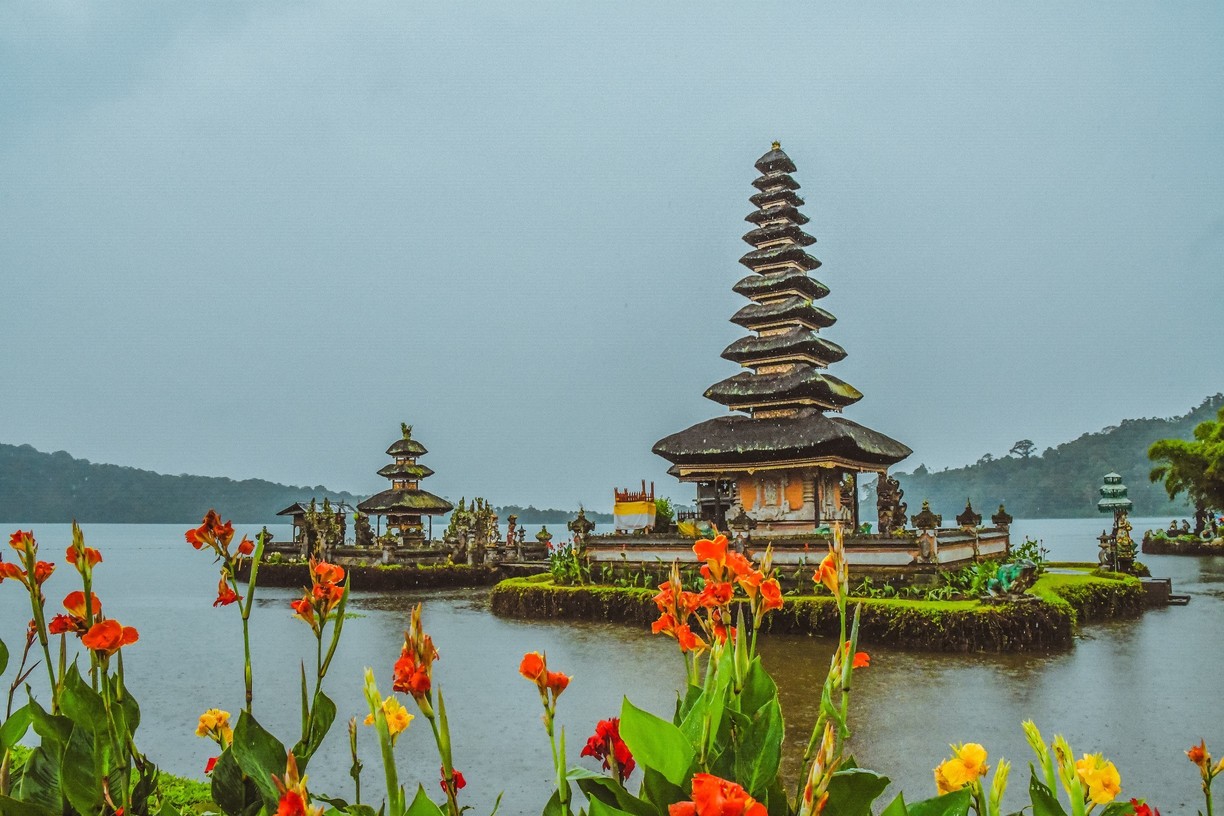 Lake Beratan is one of popular tourist destinations in Bali which is famous for its uniqueness. In this place you can see the temple in the middle of the lake, named the Ulun Danau Beratan Temple. Lake Beratan has been named as one of the most beautiful lakes in the world.

Beratan Lake or also called Danu Bratan is located in Bedugul area, Candikuning Village, Baturiti District, Tabanan Regency, Bali. It is about 55 km from the city of Denpasar, Lake Bratan is located at an altitude of 1,240 meters above sea level.