Indonesia which is located on the ring of fire makes this archipelago one of the countries that has the most mountains in the world. There are at least hundreds of mountains spread across Indonesian territory. Of the many mountains in Indonesia, some of them are favorite destinations for climbers. The reason is that the mountains have spectacular views that can only be relished when climb them.

We will try to give you a picture of the 10 most “dangerous” beautiful mountains in Indonesia. The parameter is the large number of climbers who want to climb to the mountains and the uniqueness of them. And here are 10 amazing volcanoes in Indonesia that have the most beautiful views. 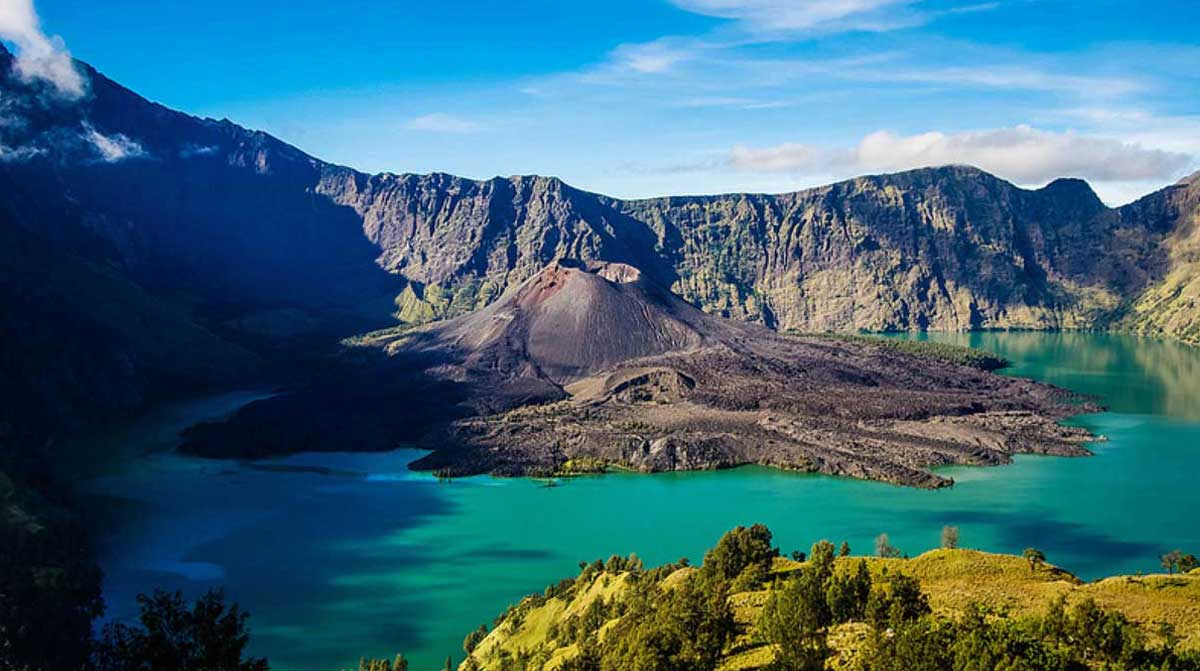 Besides having beautiful beaches, Lombok Island in West Nusa Tenggara has another stunning attraction that makes many tourists fall in love. The attraction is Mount Rinjani. It is often referred to as the best mountain trekking in Southeast Asia. It is also the second highest volcano in Indonesia.

Mount Rinjani is a complete mountain. It has a beautiful savanna overgrown with edelweiss flowers. It also has a charming view of the sunrise. Of all the beauty Rinjani has, Lake Segara Anak is the most sought after. The lake which is situated at an altitude of 2,000 meters above sea level is the most beautiful gem on Mount Rinjani.

What unique from Mount Rinjani is the existence of Mount Barujari in the middle of Segara Anak Lake. Mount Barujari is a mountain located on the top of the mountain so this mountain is often referred to as Rinjani’s child. 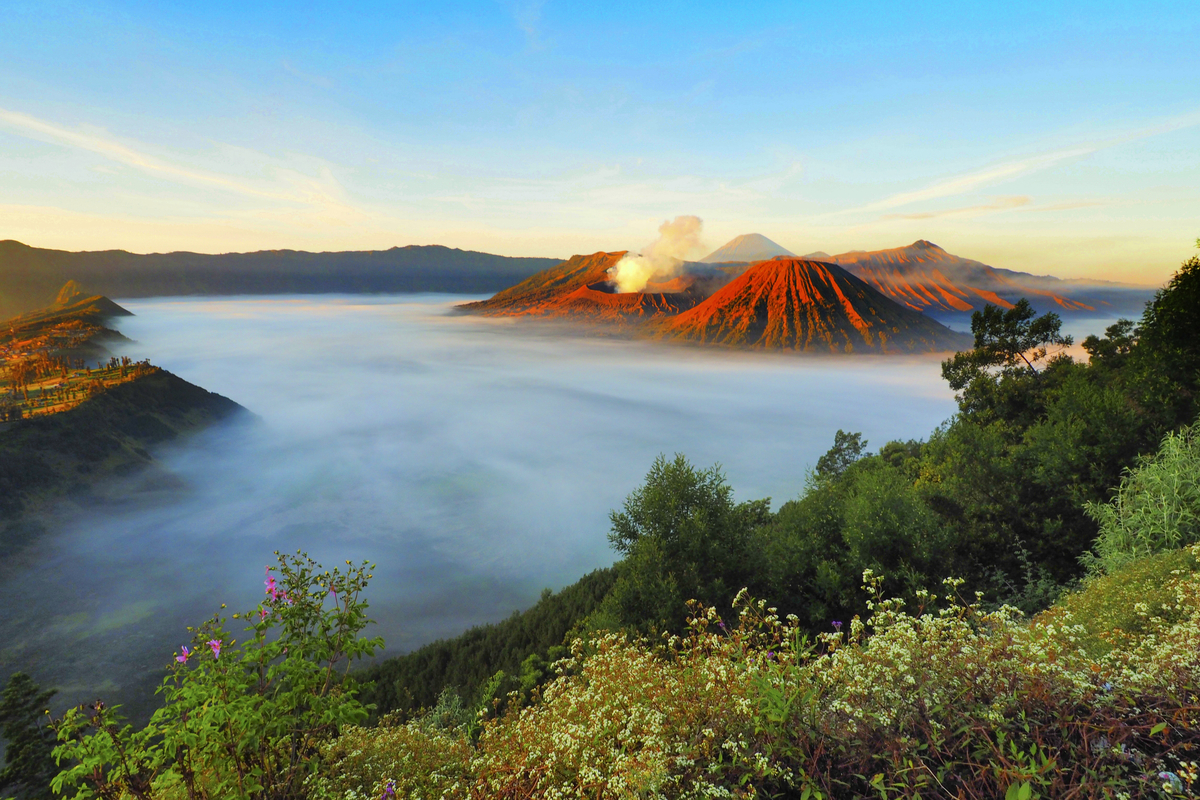 Mount Semeru is the most beautiful and highest mountain in Java Island. This mountain has been a legend for a long time. The beauty of this mountain makes climbers from various countries willing to come over. Mount Semeru is also one of the busiest mountains. The maximum climbing quota is only 500 persons per day.

Mount Semeru is an active volcano in East Java, Indonesia. Just like Rinjani, Mount Semeru also has a super beautiful gem inside, the Ranu Kumbolo. It is a natural lake at an altitude of 2,400 meters above sea level. In front of Ranu Kumbolo there is a Love Climb which is also famous among climbers. Then there is the Oro-oro Ombo filled with lavender flowers. 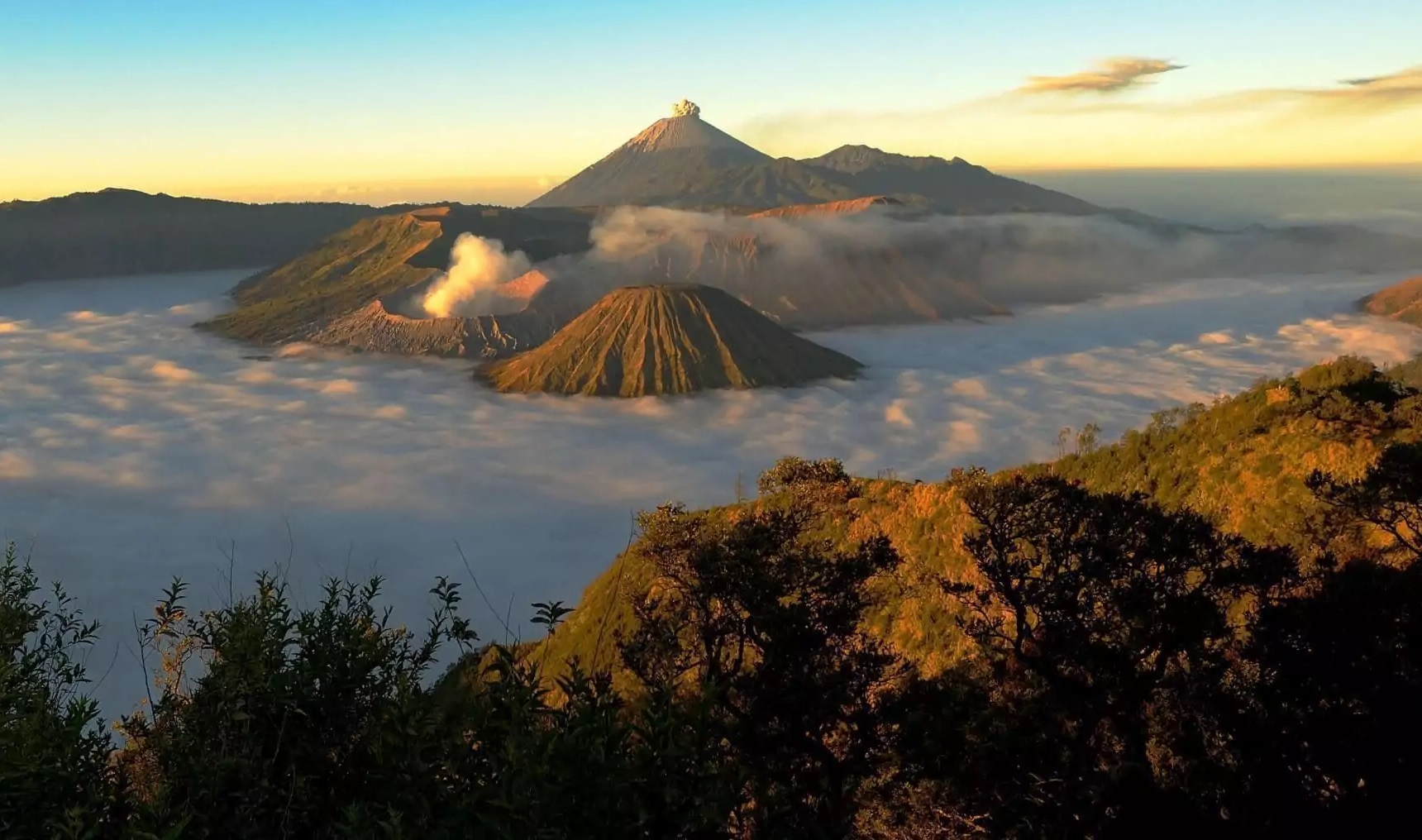 Mount Bromo is Indonesia’s most iconic volcano. Viewing the sunrise and walking to the crater are things to do when climbing this mountain. East Java Government makes Mount Bromo as one of the leading tourist destinations. This appointment is due to the fact that Mount Bromo has a view worth promoting internationally. Mount Bromo itself has been known as one of the mountains that has a very beautiful sunrise view.

Mount Bromo is also known for its vast desert. Jeep vehicles and horses are a common sight on Mount Bromo. Other than the views of the sunrise and the desert, Mount Bromo is also famous for its beautiful crater and can be reached using the stairs that have been provided. 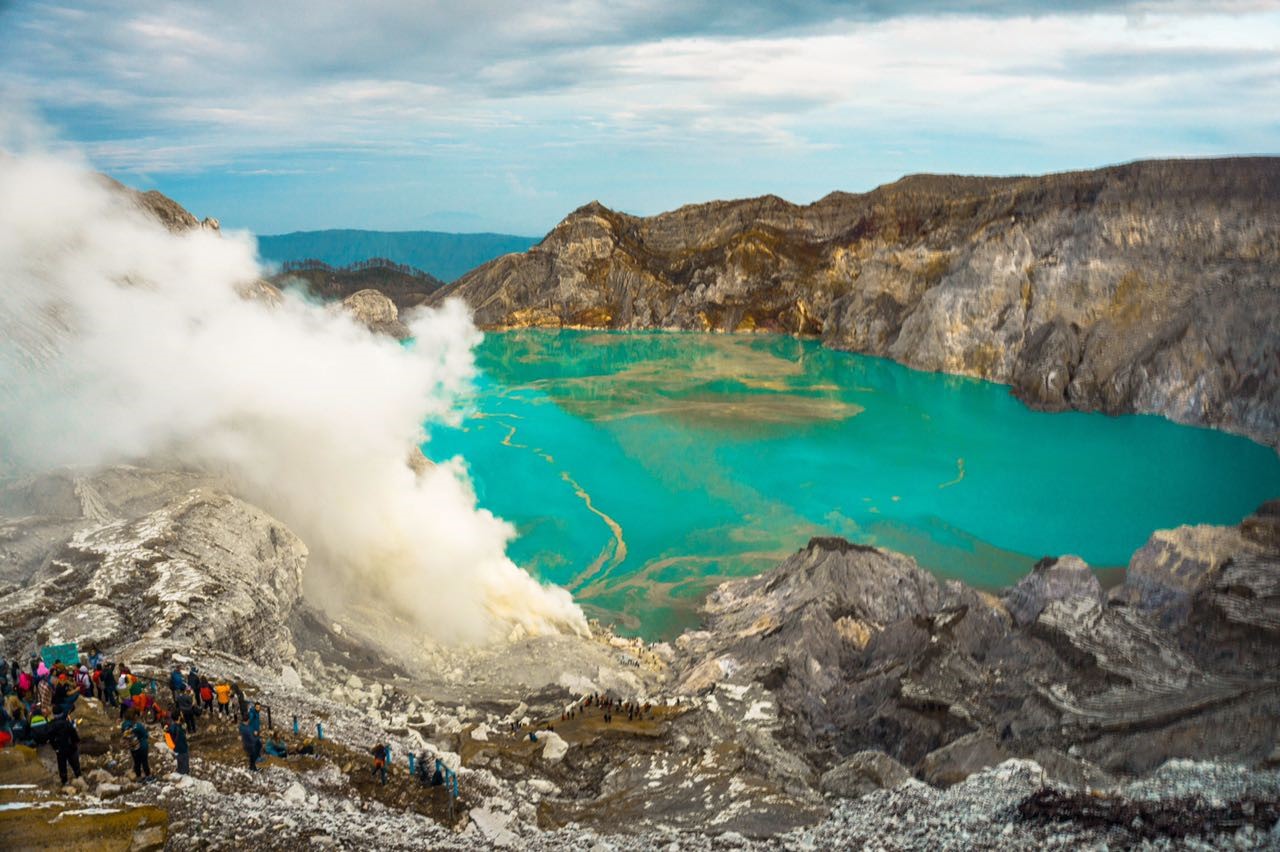 Indonesia’s Ijen Volcano spews out blue lava thanks to its incredibly high levels of sulfur. What’s special about this mountain is the view of blue fire that will look so amazing in the early hours of the morning. Mount Ijen can be categorized as a mountain that is not too high because it has a maximum height of 2,443 meters above sea level.

This mountain is located between three regencies in East Java which are Banyuwangi, Situbondo and Bondowoso. However, this mountain climbing post is located in Paltuding Village, Licin Subdistrict, Banyuwangi.

Blue fire is a rare natural phenomenon that is said to be the only two in the world. The blue flame comes from sulfuric liquid which is traditionally mined by the community around Mount Ijen. To enjoy the beauty of the blue fire at Ijen we can climb Mount Ijen at night while the maximum view on Mount Ijen is obtained in the early morning. 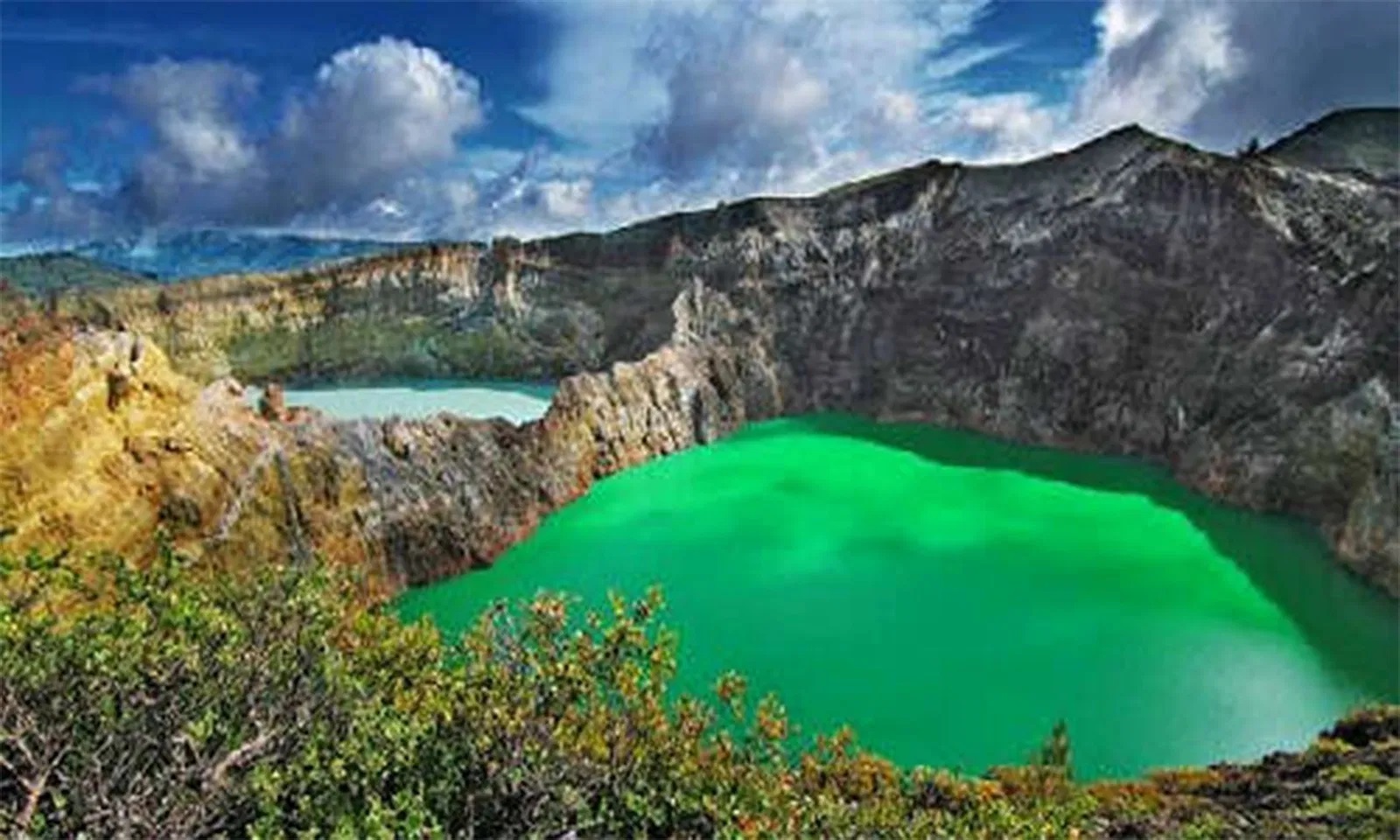 Kelimutu Volcano in central Flores, Indonesia, is famous for its three colorful acid crater lakes. Kelimutu height is only 1,639 meters above sea level but the scenery offered is really cool. At the top of this mountain there are three lakes known as Three Colors Lake because each water in the lake has a different color.

This mountain also has many myths. One myth says that if the water in these three lakes merges into one, the world will end. The people there also believe that if there is a change in color in this lakes (which are rarely happen), it is a sign that there has been an extraordinary natural event on earth. 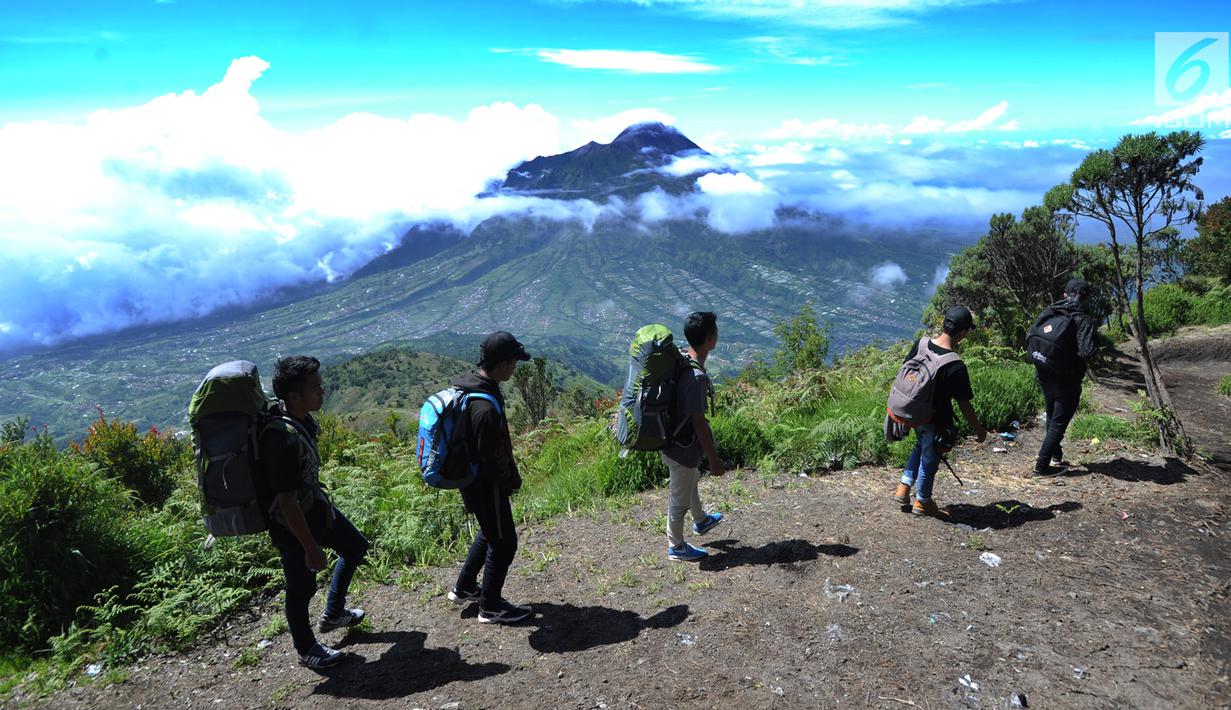 Merbabu Volcano is located in the north of Yogyakarta on the Indonesian Java island. Meaning “Mountain of Ashes” in the local language, this volcano is one of the many on the famous Ring of Fire.

Mount Merbabu presents the beauty of savannas that you can enjoy from the top slopes and peaks. Mount Merbabu itself has several hiking trails. However, the path that is known to have the most beautiful view is the Selo track in Boyolali district. Via Selo you will be treated by views of beautiful savannah. On the last savanna before the peak, the view is more beautiful thanks to the presence of edelweiss flowers that grow on the hillsides.

Mount Merbabu itself has three highest peaks namely Kenteng Songo, Trianggulasi and Sharif. The special thing about climbing Mount Merbabu via Selo is that you will be offered Mount Merapi view which is right in front of your eyes. Mount Merapi looks very beautiful from Mount Merbabu. 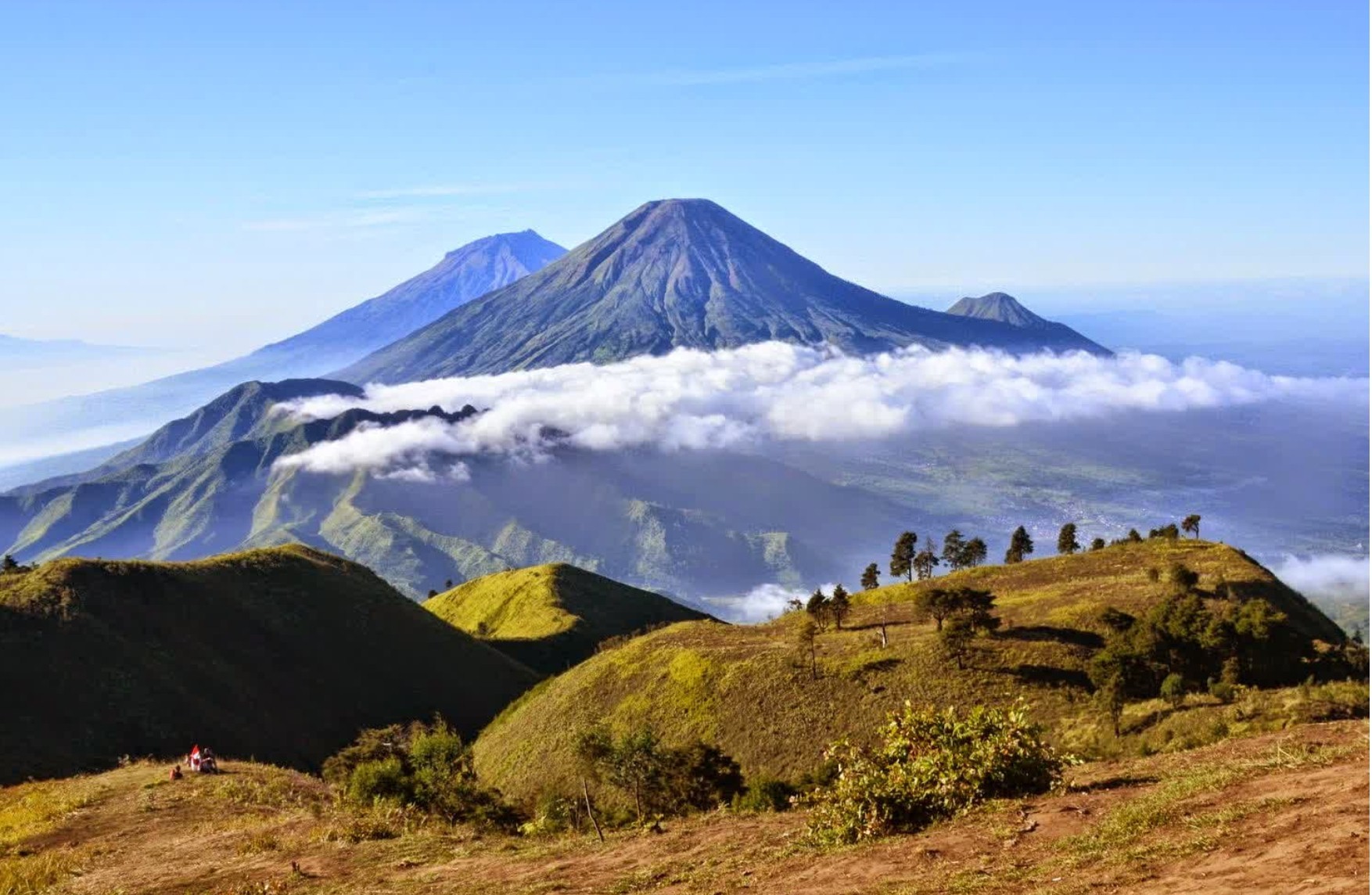 The Dieng Plateau in Central Java is well known for having beautiful mountainous landscapes. One of the best places to visit in Dieng is Mount Prau. This mountain is the highest land in the Dieng Plateau. From the top of this mountain you can see the stunning view of Mount Sindoro and Sumbing summit. Mount Prau is also the best place to enjoy the sunrise at Dieng besides Sikunir Peak.

Actually Mount Prau is not an active volcano but it stands in a large volcano complex, Dieng Plateau. Geothermal activities still happen around and there are some acid lakes exist in Dieng Plateau.

Mount Prau is very popular among travelers and has become one of the favorite climbing destinations especially for beginner climbers because the climb requires a relatively short distance, which is about 2-3 hours. Many climbers also think that Mount Prau is a mountain that has the most beautiful sunrise views. 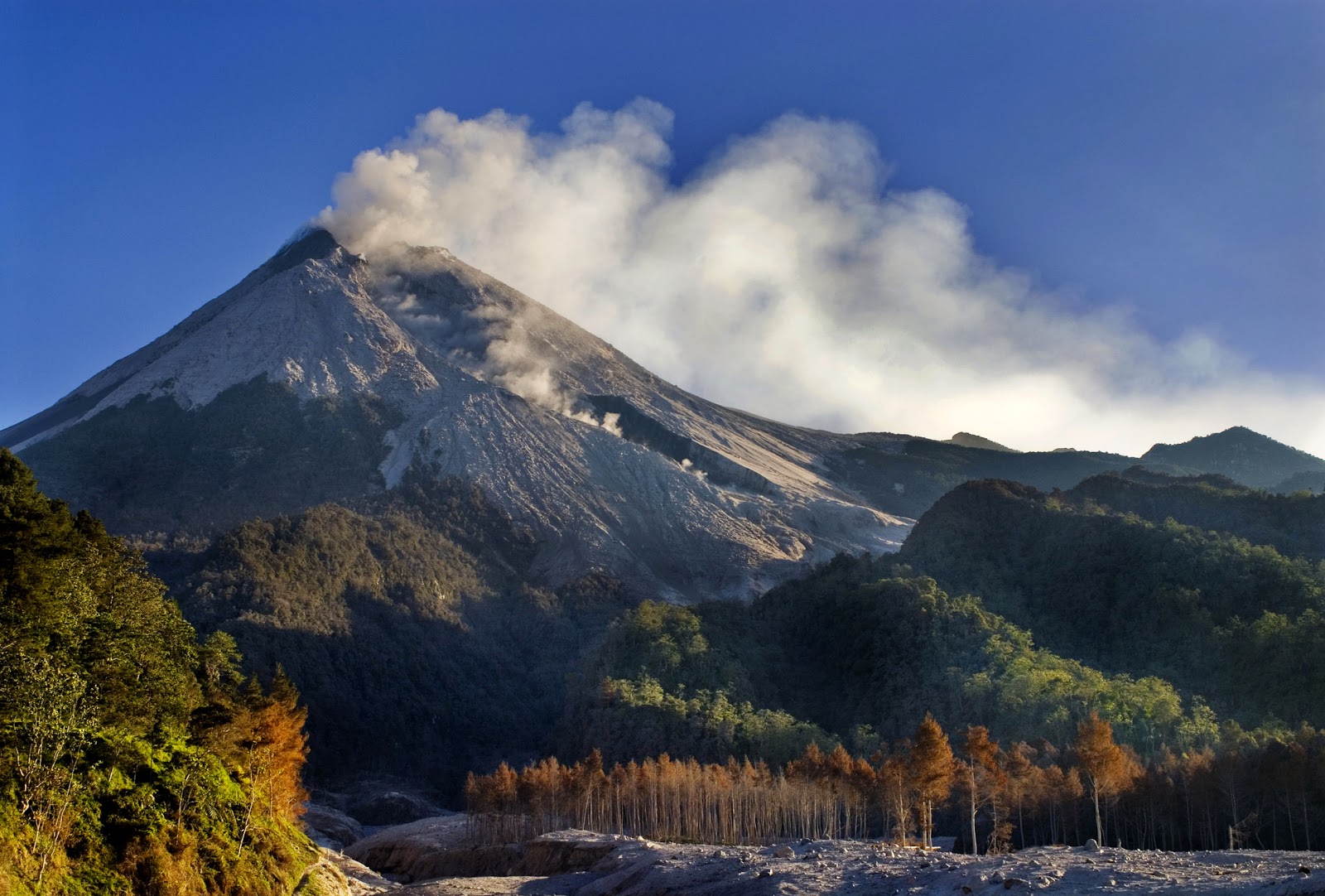 Mount Merapi is a volcano located in the central part of Java Island and is one of the most active volcanoes in Indonesia. Mount Merapi has an altitude of 2,930 meters above sea level. The name “Merapi” comes from the abbreviation “Meru” aka mountain and “fire” so Merapi actually already has the meaning of a volcano.

This mountain has a popular peak called Garuda Peak. However, due to the eruption in 2010, this famous peak disappeared because it was eroded during the eruption of Merapi at that time. Actually, climbers are prohibited from climbing to the top for safety reasons and are only allowed to climb until the Bubrah Market area. 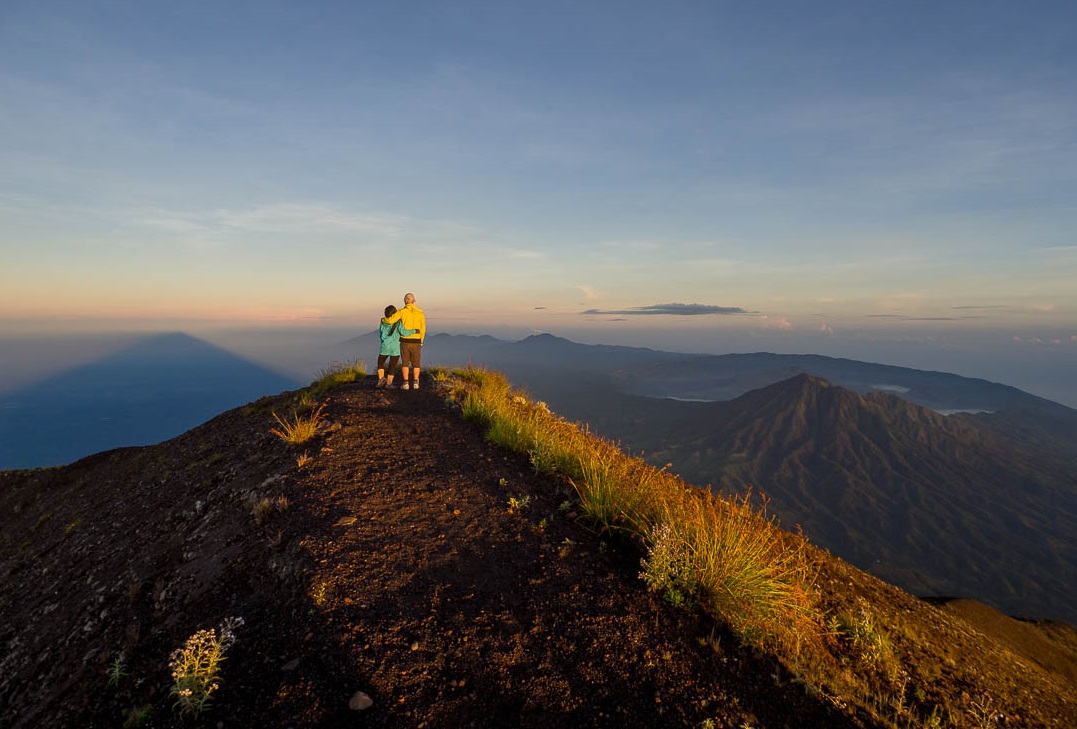 Mount Agung is indeed one of the famous tourist attractions in Bali and is also one of the active volcanoes on the Island of Bali. Mount Agung has an altitude of 3,014 meters above sea level and is believed to be the abode of ancestral spirits of the Balinese Hindu community.

Located at an altitude above 3000 meters you can see the nature of Bali and the surrounding area perfectly. Visitors are not only spoiled by the natural scenery around the exotic Mount Agung, also Mount Rinjani which is located on Lombok Island can be seen from the peak of this famous mountain.

Besides Rinjani, the beauty of the Nusa Penida Islands, Sanur Beach and Lake Batur can also be enjoyed from the top of the mountain. 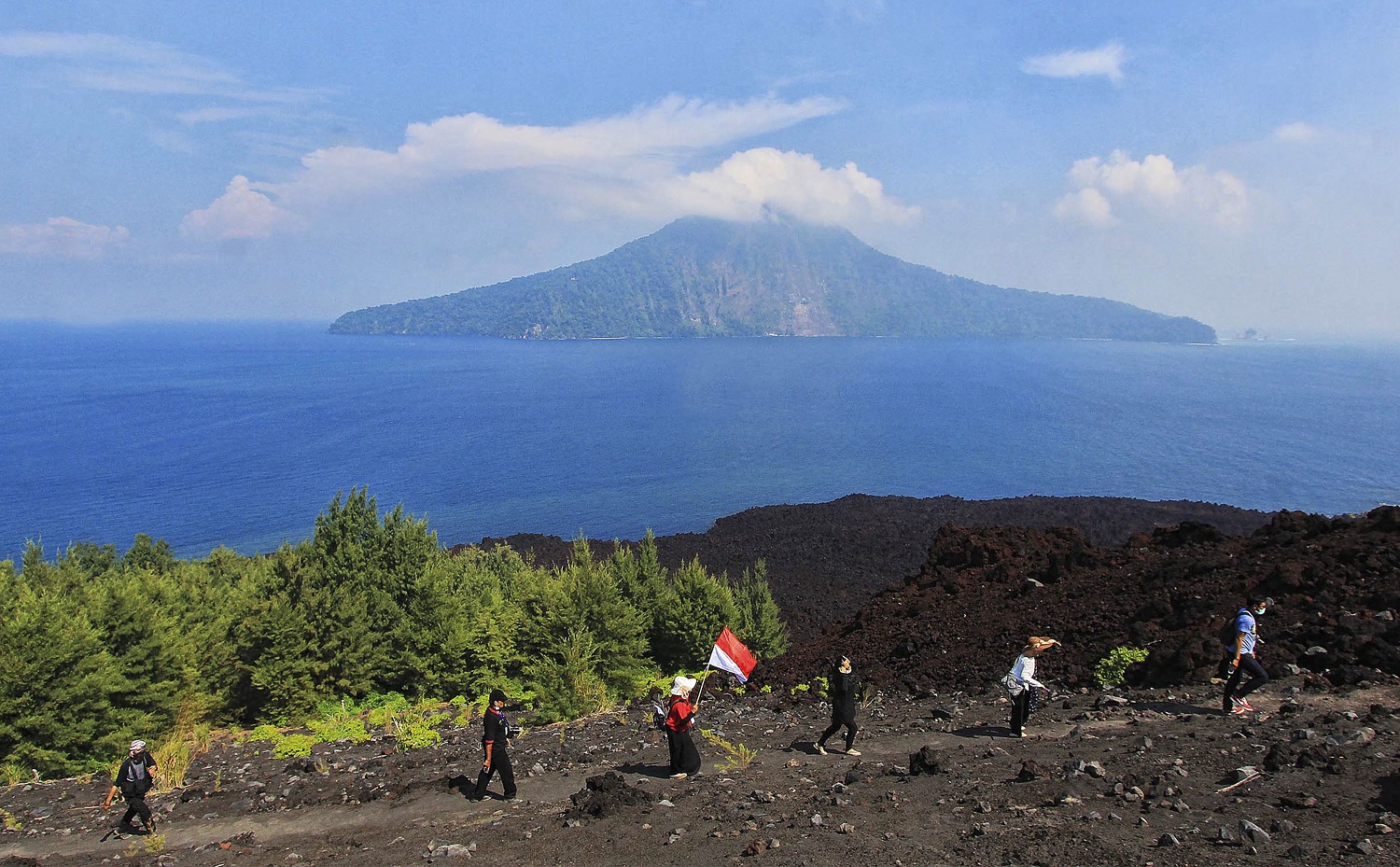 Krakatau is an active volcano in Indonesia. The eruption that occurred in 1883 caused the destruction of an island located in the middle of the Sunda Strait. As a result of the eruption of Krakatoa, 36,000 people died.

Since last eruption in 2011, tourists are no longer allowed to climb to the top of the Child of Krakatau. Tourists can only climb to a height of maximum 200 meters.

Other than Child of Krakatau trekking activity, this nature reserve area also has Sebuku Island, Umang-umang Island and Sebesi Island which can be rest areas for tourists after exhausted exploring Child of Krakatau. There are many tourist activities that can be carried out on those islands, one of them is snorkeling to watch the beauty of anemones and clown fish houses.