6 Unique Things You Need to Know About Mentawai Tribe

Siberut Island in the Mentawai Islands, West Sumatra, is a place to see and explore the traditional life of the Mentawai Tribe. There are several tourist villages that can be visited, including Muntei, Madobag, Ugai, Butui, Atabai and Matotonan in South Siberut District.

South Siberut can be reached by boat from Padang City. The “Mentawai Fast” fast boat at the Port of Muaro Padang departs every Tuesday and Thursday. The travel time is about 3.5 hours to the Mailepet Dock, South Siberut.

From Mailepet Dock to Muntei Village, you can rent a motorbike because it is near and only one kilometer away. But if you want to go to other villages, you have to rent a pompon boat or an engine-powered boat.

In this article we are going to share 6 unique things you need to know about the Mentawai Tribe. 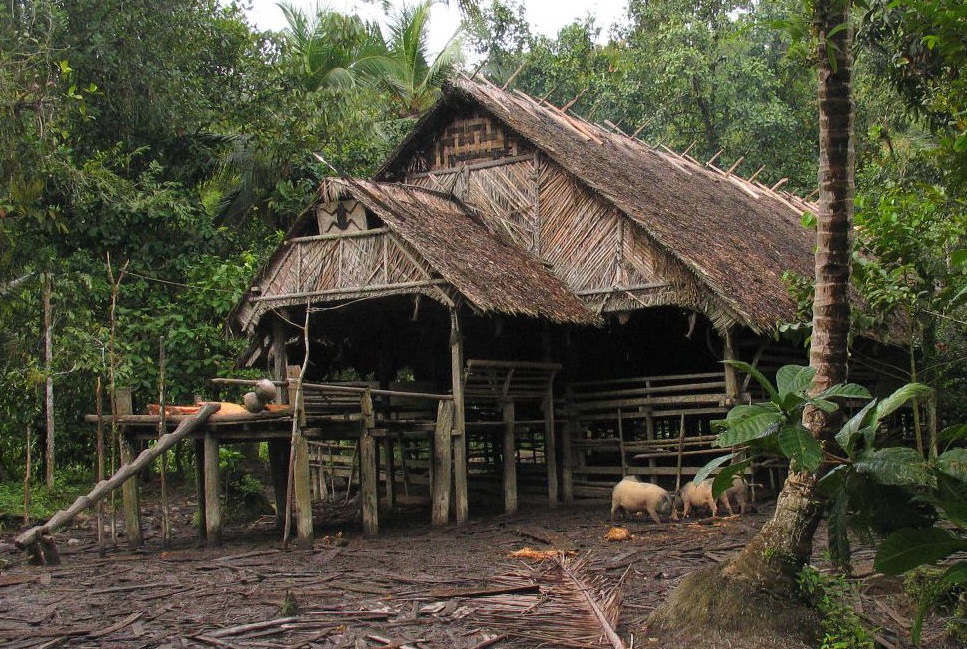 Uma is a name for the Mentawai traditional house. This is also the name given to one clan group in Mentawai. Each clan has a large house to hold traditional activities, such as punen or parties. Uma is made of wood with a leaf roof. The size is quite big, extends to the back with a broad veranda too.

At the entrance of the house there is a place to hang the skulls of monkeys, pigs and birds from hunting activities. In the middle of the Uma there is a stone fireplace, called Abut Kerei. Its function is for lighting in the night, a place to heat the Gajeuma (drum) when Sikerei (shamans and healers) dance in a ritual.

The stove is also a place for cooking the prey, such as monkeys and deer. In addition, it also become a place for a ritual of stepping on embers in the ceremony for the appointment of a new Sikerei.

Staying overnight in uma can be a very interesting experience while observing the daily life of Mentawai Tribe. 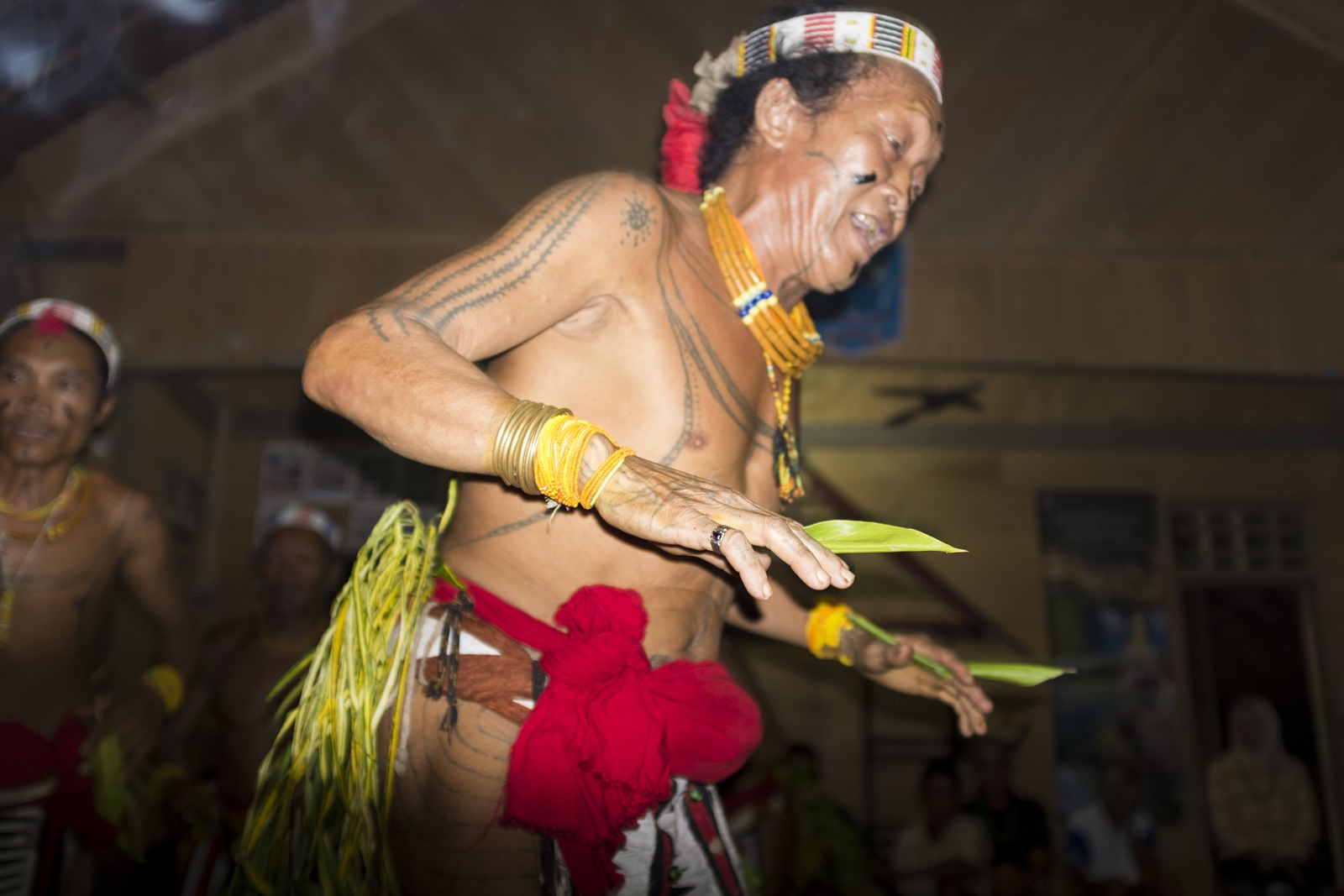 Sikerei is a medical expert and herbalist who connects the residents with the spirits. Sikerei become an important figure in Uma. He has the skills to treat various types of diseases with herbs from medicinal plants.

In medication process, Sikerei often performs some rituals which are the final stage of treatments. The spirit of the sick is comforted by dancing and offerings so it will not leave the body of the patient. If the soul has left the body means that person can die. All the Sikerei rituals are performed in Uma. 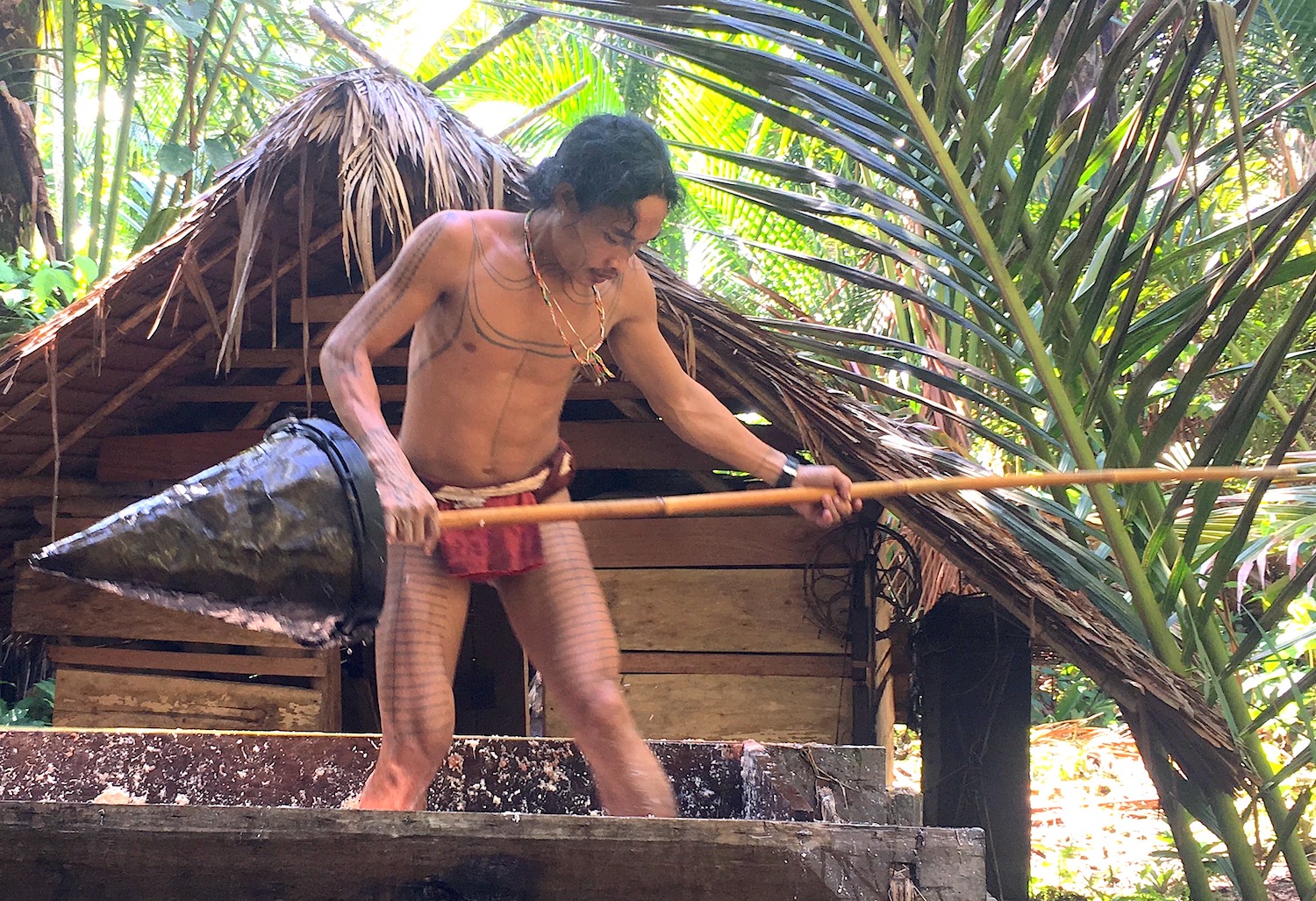 In the traditional village of Siberut men cultivate sago trees on the banks of the river. Sago is a staple food of the Mentawai Tribe.

After being processed, sago flour which is still wet and hard is shredded again with grated rattan, then wrapped in sago leaves and roasted. Making food from sago is carried out by the women.

Food from sago is called kapurut and is a daily staple food. Kapurut can be eaten without side dishes, or with boiling river fish in bamboo tubes. Can also be eaten with boiled fish.

One sago tree can support a family for six months. Every Uma has also livestock of pigs and chickens. 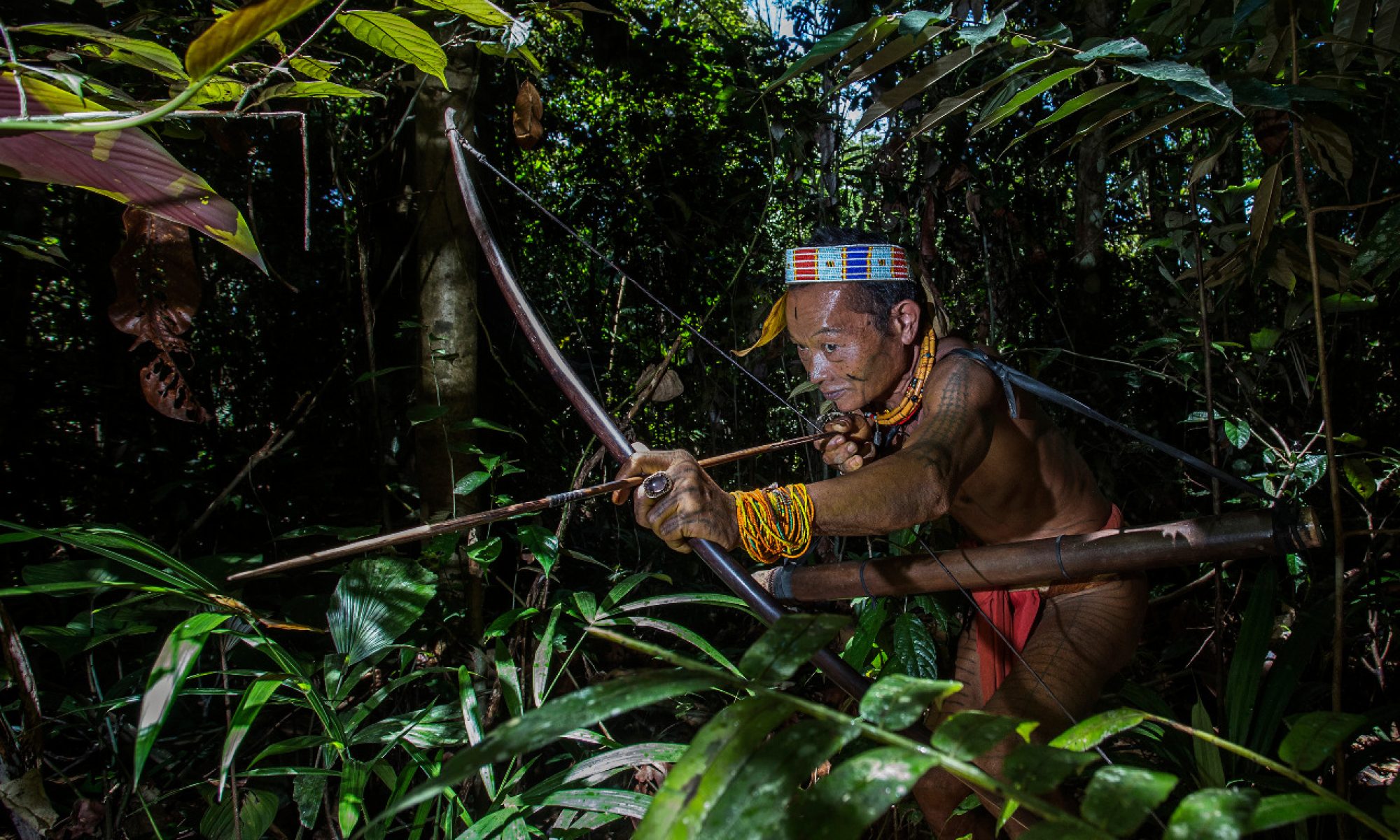 Men in Uma  love to hunt. The skulls of their prey were hung at the entrance of Uma as decorations and souvenirs. They hunt using arrows smeared with poison potions. The poison concoction is made from plants around Uma.

After applying the poison, the arrows are dried in the sun and stored in bamboo tubes. The poison of this arrow is so deadly, that even scratching it with  hands  can cause death. No animal can survive long after being poisoned by the arrow even a small wound in the tail of animals. 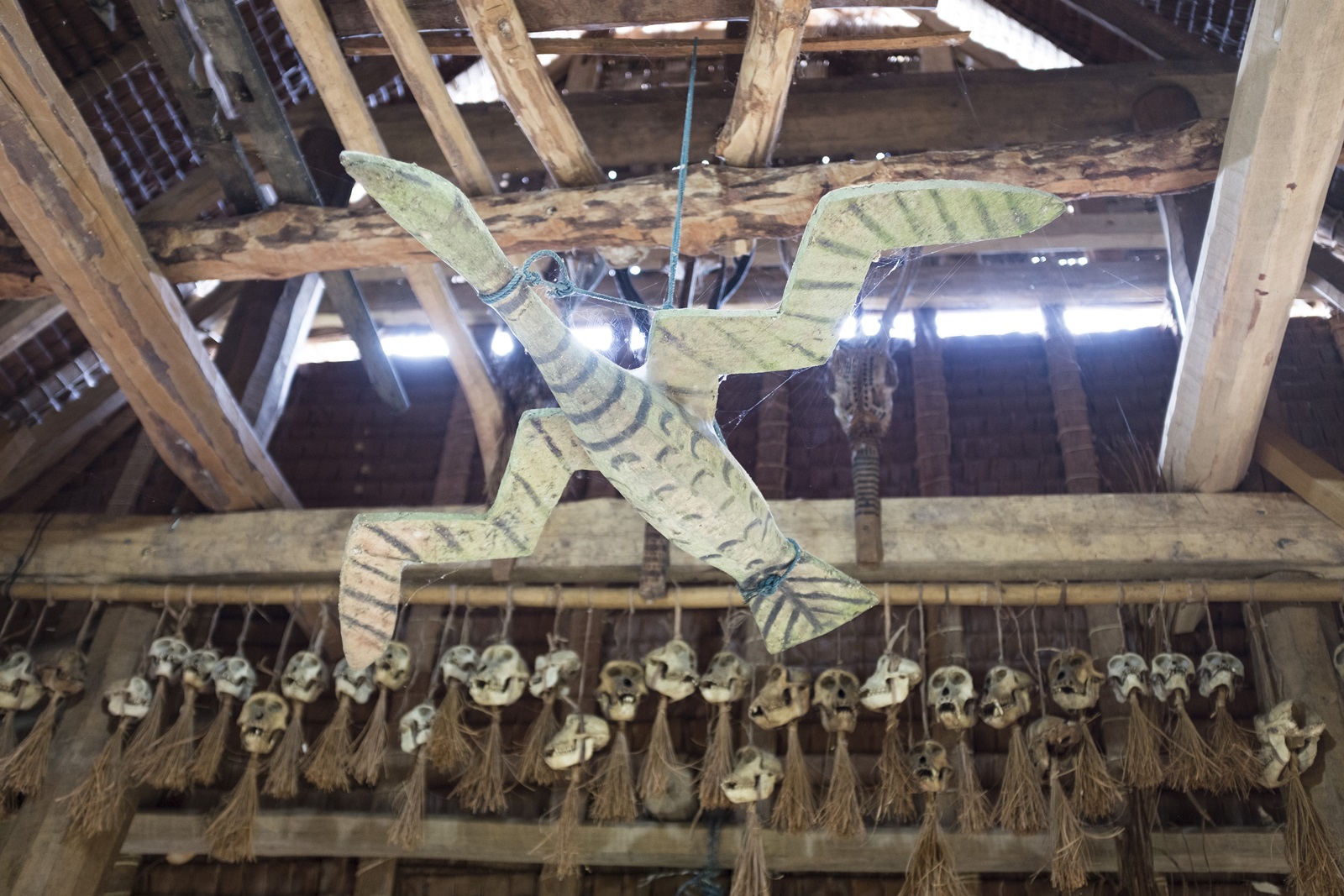 Inside the Uma, there are many large cauldrons hanging neatly on the wall. There are more than 30 cauldrons collected in every uma. Those cauldrons are called Alak Toga or dowry from the groom to the woman’s family. 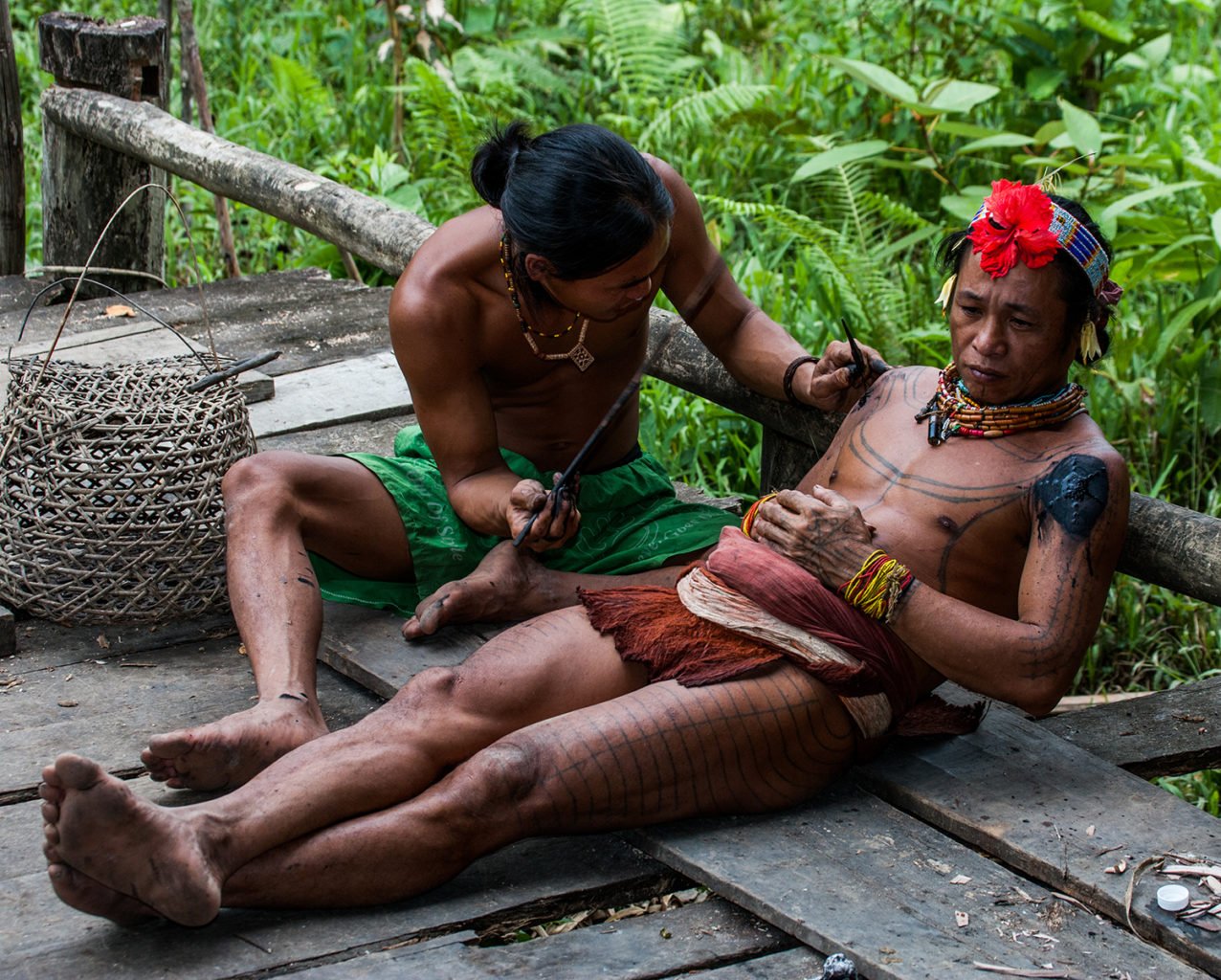 Tattoos for the Mentawai people are not only for the beauty of the body, but also as a symbol that shows the position of him or herself. There are around 160 tattoo motifs on Siberut. Every Mentawai person can wear dozens of tattoos all over his body. The tattooing process is conducted by Sipatit, must be a man and can not be done by a woman.

Before the tattooing process is conduct, a punen patiti ritual must be held, led by a Sikerei. The ceremony starts by slaughtering pigs or chickens as soon as the first tattoo is carried. The tattoo dye material is made from kitchen furnace fumes mixed with sugar cane water. And for the awl is a needle tied to a small stick of wood. Then, it is hit with another small woods to pierce the ink into the skin.