The Raja Ampat region is part of a vast ancient landmass. Around 10,000-20,000 years ago, Papua Island was still one with the land we know today as the Australian continent. This land area is so large that it is called the Sahul Shelf which is part of the Indo-Australian plate. As a result of the unification of this region, now if we look at the animals in Papua, they are more or less similar to those in Australia.

In addition, if we examine more deeply, the indigenous people of Papua have similarities with the Aboriginal people who are the original inhabitants of Australia. They come from a common ancestor, which is the Austromelanesoid race with the Negroid sub-race. These similarities have led scientists to conclude that the Papua and Australia regions are both on one very large continent. 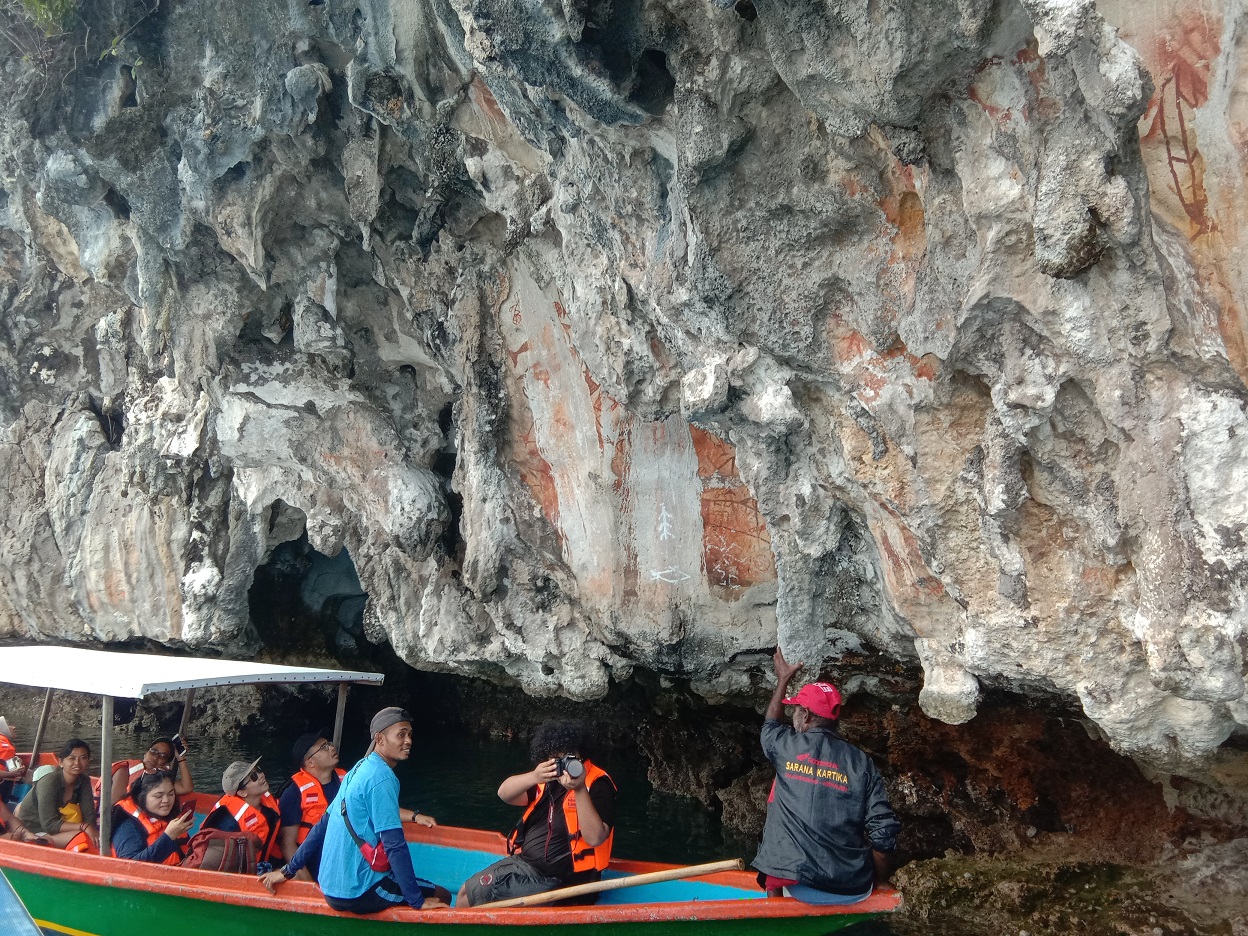 At that time, the earth was very young and often experienced shifts. These paintings generally have animal motifs such as frogs, fish or birds. However, there are also palm prints with 4 or 5 fingers. The hand paintings that we saw generally depict the power of a group in a place. Usually, these engraved paintings describe the condition of the area occupied.

These paintings are not only in one place, but scattered in several points of the Kabui Bay area. The position of this painting is indeed strange because it is on a wall that is half submerged in the waters of Raja Ampat. These cliffs are hard to reach and will make you wonder how to paint them. Well, the natural conditions tens of thousands of years ago were not the same as today. It is very possible, during prehistoric times, the position of the wall was not above water but still attached to the land.

Not only paintings, visitors can also visit a cave on top of a cliff not far from the walls of the paintings. This cave is a tomb of several residents who are considered the ancestors of the Raja Ampat people. Uniquely, the body is not buried in the ground, but is simply placed on the ground. Now, the people who are considered to be ancestors are only bones. The atmosphere of this place is quite deserted and tense, but all of that is not that scary because there is a beautiful view of the Kabui Bay area.

Prehistoric life in Raja Ampat is very impressive and quite unique to be learned. This can be one of unique attractions for tourists visiting Raja Ampat as well as proof that the wealth of Raja Ampat is not only about the beauty of the underwater world. These prehistoric remains are a part of a series of directions for the distribution of the ancestors of the Raja Ampat people from the western archipelago to Papua and Melanesia.