Indonesia has many tribes scattered from the islands of Sumatra to Papua and the number can reach thousands of them. Java Island is the one that has the most number of tribes and one of them is the Baduy Tribe.

The Baduy Tribe is the native of Banten province situated precisely in the Lebak District, Banten. Tradition and culture become one thing that is very preserved by the Baduy.

The Baduy has been designated as a cultural preservation place by the Lebak regional government in 1990 because the area that crosses from Ciboleger Village to Rangkasbitung Village has become the residence for the Baduy, which is the native of Banten Province. 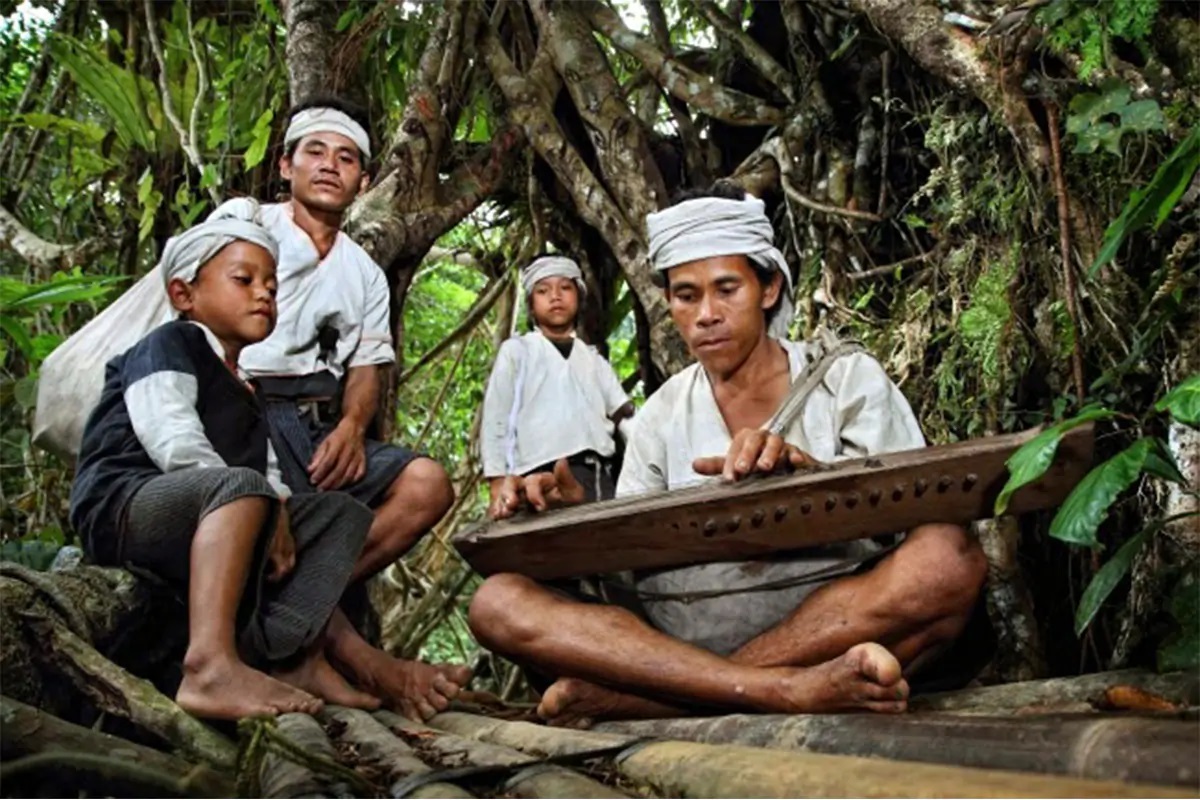 The Inner Baduy is a group that lives in the forest and is also the most obedient to the rules set by their customary head.

The hallmark of them in this case are their clothes are not buttoned and collared, not wearing footwear and the clothes are only white that symbolize purity and culture which is not affected from outside world.

This Indonesia tribe also does not comply to modernization and rejects technology, money and school. They can only communicate with their native language which is Sundanese and read Hanacara letters or characters.

Pu’un is assisted by Jaro as his representative and is tasked with determining the planting period and the harvest period, also applying customary law and treating sick people. 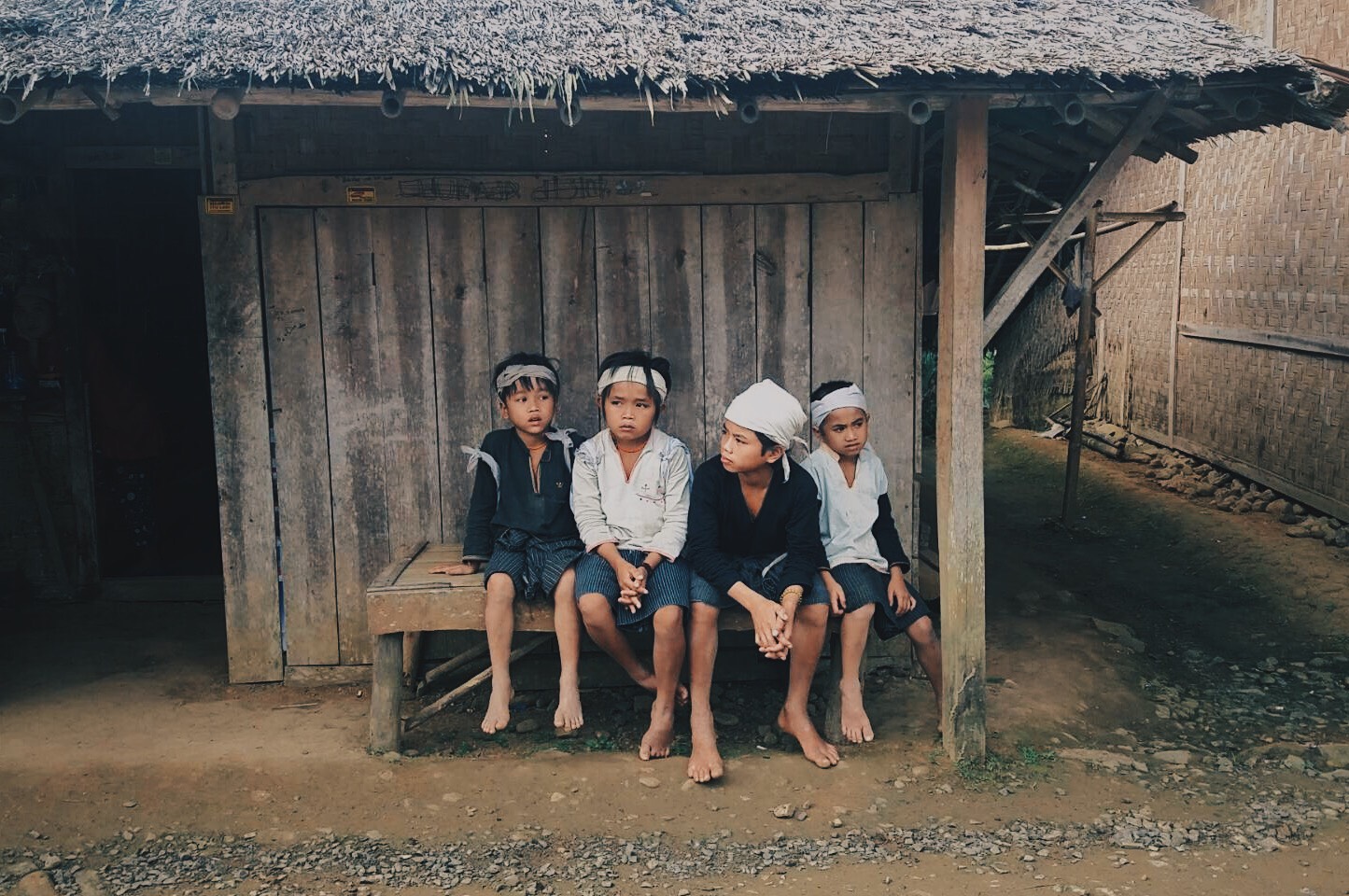 Different from the Inner Baduy, the Outer Baduy live in an area that surrounds the Inner Baduy living area. This outside tribe has accept modernization and also familiar to foreign cultures such as schools and money.

Because they already know money, some Outer Baduy people go outside to sell forest honey. The clothing worn by the Outer Baduy is also different from the Inner Baduy, which is black.

The Outer Baduy lives in 50 villages in the Kendeng Mountains region.

The utterance of Baduy comes from the Dutch researchers who see the similarity between the people in Kanekes Village (Banten Ethnic) and the Badowi community in Arabic.

Another version states that the name of Baduy is taken from the name of the river which is located in the northern part of Kanekes Village, the Cibaduy River. 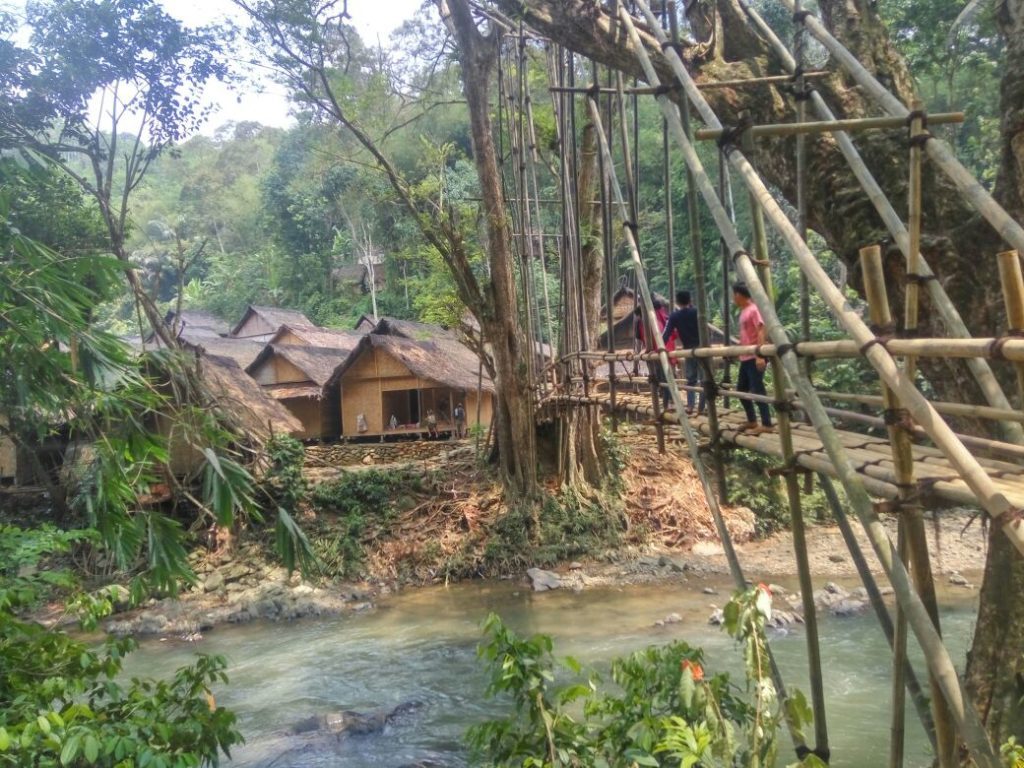 The Baduy people make a living as farmers or cultivators of the fields. Fertile nature makes it easy for the people to produce various food commodities. In the practice of farming the people also do not use cows or buffaloes to cultivate land.

The Baduy also strictly forbid dogs from entering their area of residence for preserving nature reason. The Baduy people also like to raise chickens. However, they will only slaughter chickens on certain days such as traditional ceremonies or wedding days. 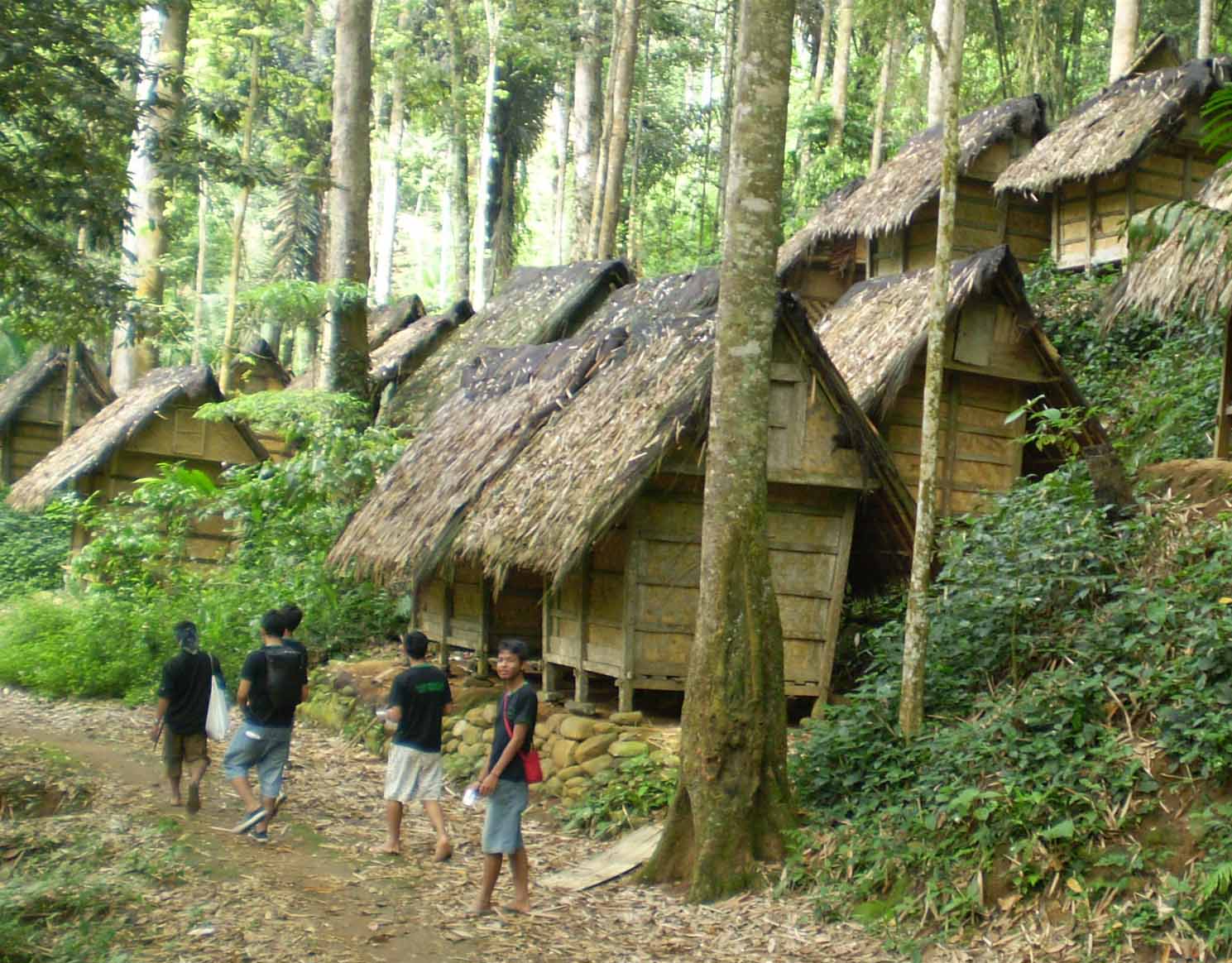 The Baduy house is made of wood and bamboo and built with stone as the foundation. The Baduy house consists of three rooms with different functions of each.

The front serves as a place to receive guests and weaving activity for women. The middle part is family room and for sleep. While the back is used for storing harvests.

All rooms are covered with a base made of woven bamboo. For the roof using palm fibers or coconut leaves. The Baduy house is made face to face and always faces north or south.

Not only electronic equipment, the Baduy also do not use household furniture such as plates or glass made of metal or glass. They prefer to use materials from nature. For example, for glass they use pieces of bamboo. 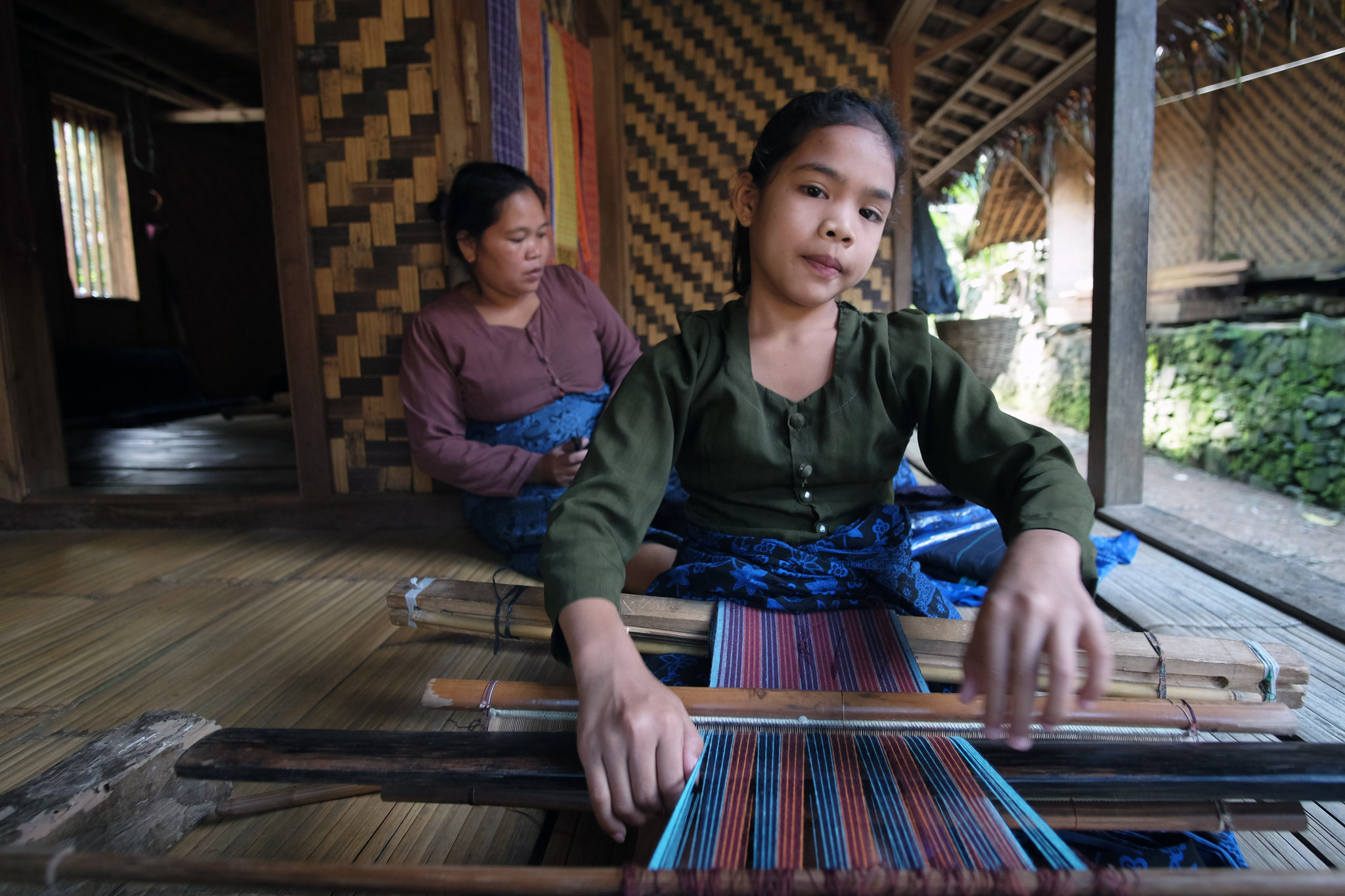 Every Baduy woman is required to be able to weave. A soft textured woven fabric is used for materials to make clothes while the rough for headbands or belts.

Beside being used by oneself, woven fabrics from the Baduy are also traded as souvenirs for tourists.

Besides cloth, the Baduy also make bags from the bark of a tree called “koja” or “jarog”. This bag is used to store all kinds of materials needed when on the move or on the go.

Baduy people are also known like to walking. They will walk everywhere even though the distance traveled is quite far. 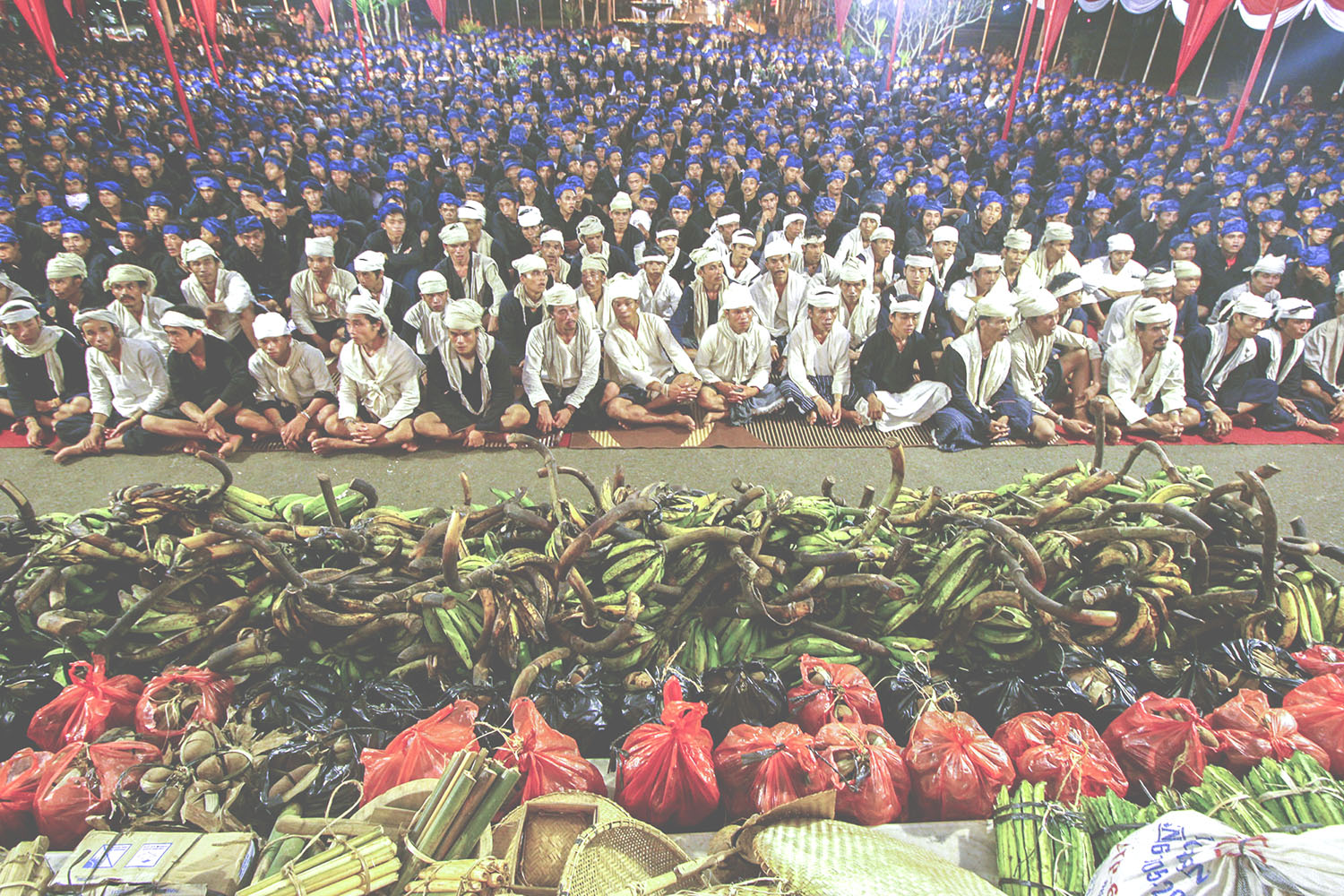 The Baduy believe that they are the descendant from Batara Cikal, which is one of the seven gods sent to earth. According to their belief, the Baduy are tasked to maintain world harmony. This belief is also called Sunda Wiwitan, which is worshiping ancestors as a form of respect.

There are three types of world in Sundanese Wiwitan beliefs as mentioned in the poem concerning the mythology of the Kanekes people:

1. Buana Nyungcung: the place where Sang Hyang Kersa resides, which is at the top,

2. Buana Panca Tengah: where humans and other creatures live, located in the middle,

3. Buana Larang: hell, located at the bottom of the world.

This concept is similar to heaven, earth and hell.

The Baduy has a tradition of fasting for three months in a row called Kawulu. When the Baduy is doing the Kawulu, the outside population is prohibited from visiting the Inner Baduy. If you still want to visit, you can only allowed to go to the Outer Baduy villages and also can not stay overnight.

For the Baduy, Kawulu is a sacred activity and cannot be disturbed by outsiders. During the Kawulu, the Baduy will pray to their ancestors to always be given harmony and an abundant harvest.