The one and a half hour trip from Bukittinggi to the west will not be in vain because you will be presented with a mountainous natural atmosphere decorated with rows of beautiful waterfalls about 100 meters high. Not to mention the place where four clear rivers pass, ready to spoil your eyes.

The Harau Valley is a fertile valley located in Harau District, Lima Puluh Kota Regency, West Sumatra Province. Located about 138 km from Padang and about 47 km from Bukittinggi or about 18 km from the City of Payakumbuh and 2 km from the center of government of Lima Puluh Kota Regency. This place is surrounded by colorful steep granite stones with a height of 100 to 500 meters.

Public transportation is ready to take visitors through Bukittinggi. Renting a minivan or motorbike will ensure that your visiting time in the Minangkabau highlands is more precise and this is one of the most beautiful valleys in Indonesia. Harau is believed to have originated from the word ‘parau’, a local term which means hoarseness. 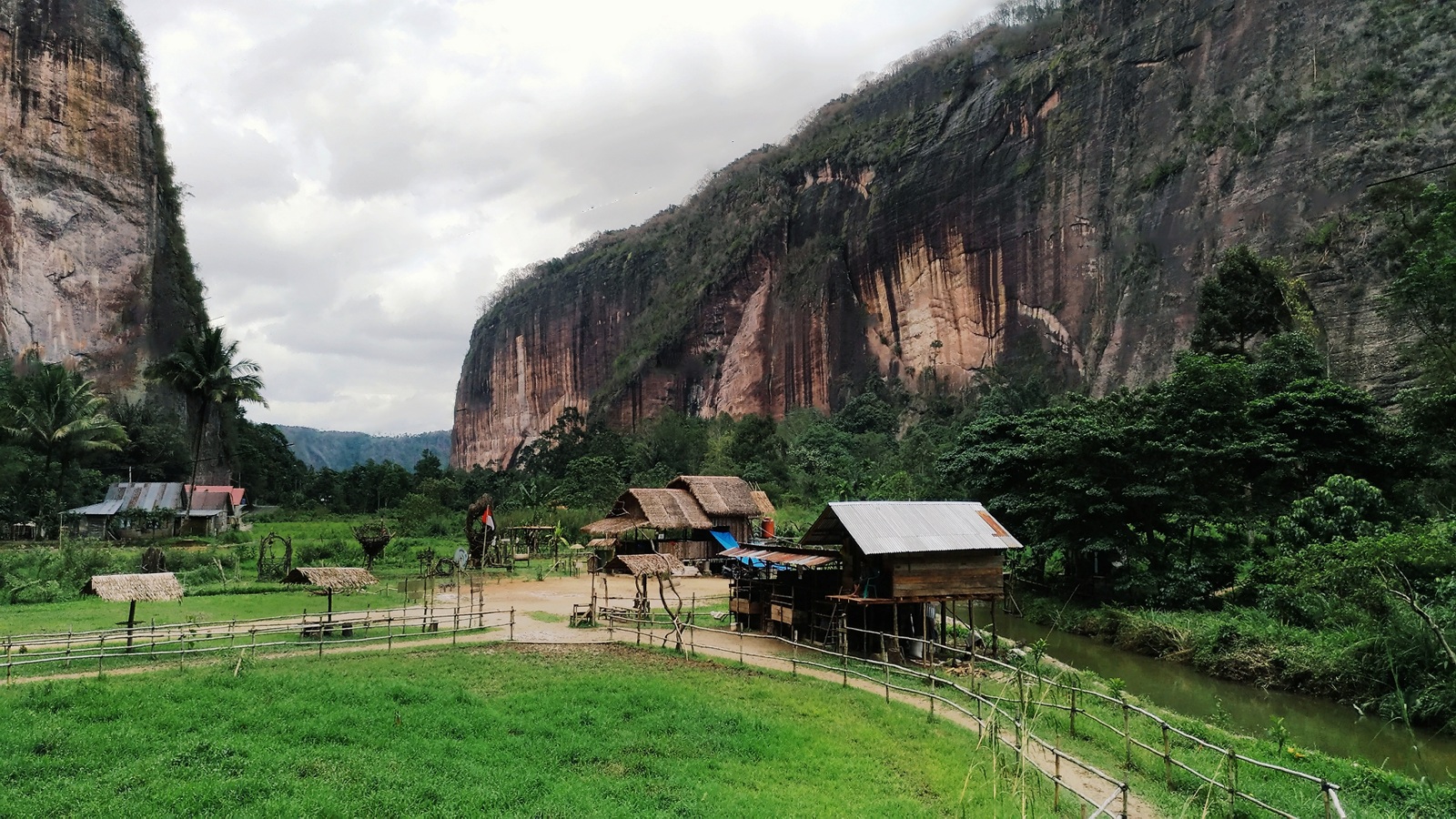 In the past, the residents who lived on Jambu Hill often faced floods and landslides which caused uproar and panic. The inhabitants often scream hysterically and eventually make hoarse voices. With the characteristic voice of the people who hear hoarse, the area is called ‘orau’ and then changed its name to ‘Arau’ until finally the mention is more often to ‘harau’.

Traveling 44 kilometers to Pekanbaru and Riau, you will stop at the Harau Valley with steep granite cliffs as high as 80-300 meters. Steep rock cliff fence and straight upright reddish color surrounding the valley is so captivating for you to see and perfect in photo recording.

The Harau Valley has a tropical climate and fertile land, as well as the beauty of a charming natural landscape. The Harau Valley is nicknamed the Yosemite Valley in Indonesia because it has a beauty like the Yosemite National Park which is located in the Sierra Nevada of California which has been famous throughout the world.

In the Harau Valley, there is a waterfall called Bunta Waterfall or locally called Sarasah Bunta. This waterfall flows fresh water from the highlands with three other waterfalls in this valley.

The Harau Valley is actually a nature reserve covering an area of 669 hectares. The results of a survey by a geological team from Germany in 1980 found that the rock types found in this area were identical to those found on the seabed in the form of breccia and conglomerate rocks. The legend of the people of Sarasah Aka Baraya also tells that around the Harau Valley Nature Reserve there used to be a sea.

The Harau Valley consists of three areas, which are the Aka Barayu Resort, the Resort Sarasah Bunta, and the Resort Rimbo Piobang. Aka Barayu Resort has a beautiful waterfall and swimming pool plus a beautiful natural atmosphere. In addition, it also has the potential for the development of rock climbing because it has steep rocky hills and is able to reflect sound (echo). Here, there are also lodging facilities such as homestay complete with amenities. This is where rock climbing enthusiasts like to find their paradise.

The steep walls are not only an attraction for photographers but rock climbers are also interested in climbing the walls in this valley where there are 300 rock climbing locations. On the other hand, the steep rocky cliff fence has created a beautiful and challenging relief, especially for those of you who like rock climbing.

The steepness of the cliffs in this place reaches 90 degrees with a height of 150 to 200 meters. Climbers dubbed this valley the Yosemite of Indonesia.