Indonesia, which is located on the ring of fire track, makes it one of the most mountainous countries in the world. At least there are hundreds of beautiful mountains scattered in Indonesia territory. Among all of mountains that exist in Indonesia, some become the favorite ones for climbers. It’s because of the spectacular views you can enjoy after climbing them.

The pain worth it  after viewing a stunning natural painting of nature. The view of grasslands and green trees that are occasionally decorated with white clouds will make you always crave the mountain atmosphere of Indonesia.

Indonesia has many beautiful mountains. If you are asked to determine which mountains have the most beautiful scenery, surely everyone will be confused. However, we will try to give you an overview of ​​Indonesia best mountain to climb. The parameter are based on number of climbers who want to climb to the mountains and the uniqueness of those mountains. 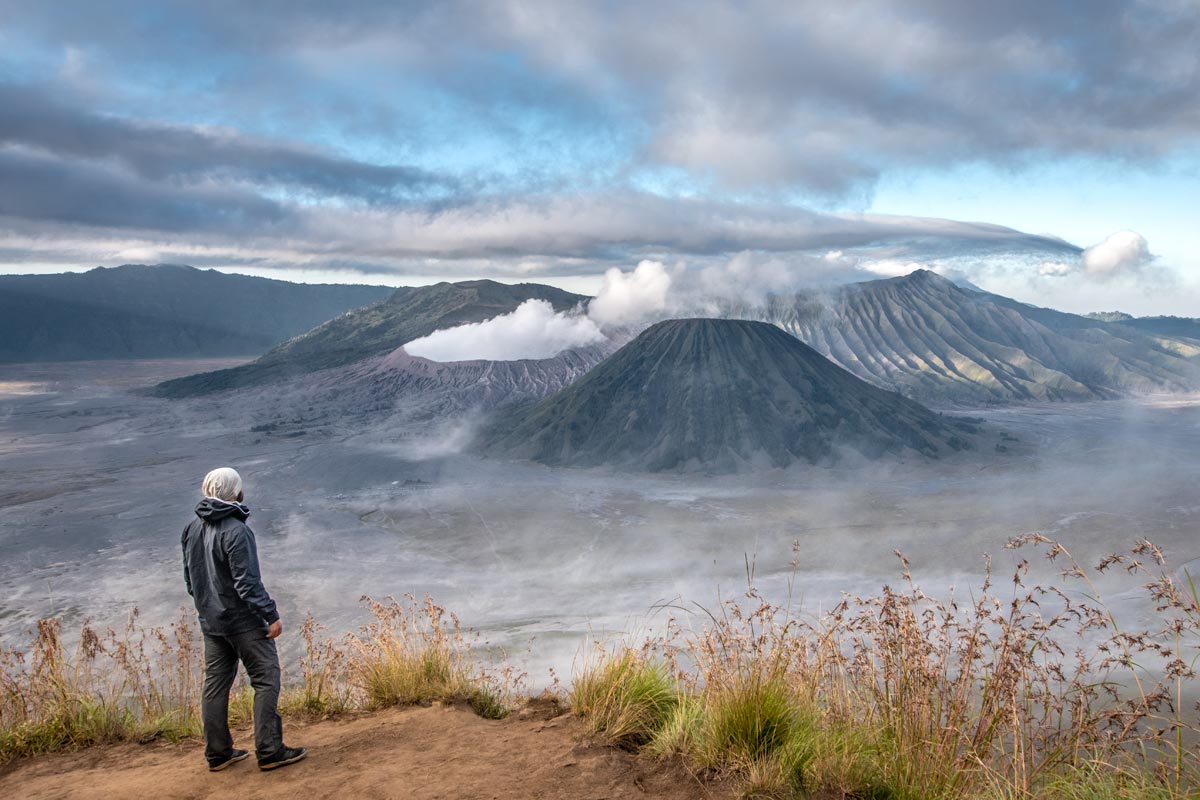 Mount Bromo is also known for its vast expanse of desert. Jeep and horse are a common sight on Mount Bromo. It has a height of 2,329 meters above sea level. In addition to the view of the sunrise and the desert, Mount Bromo is also famous for its crater that you can reach by stepping the stairs provided near the peak of the mountain. 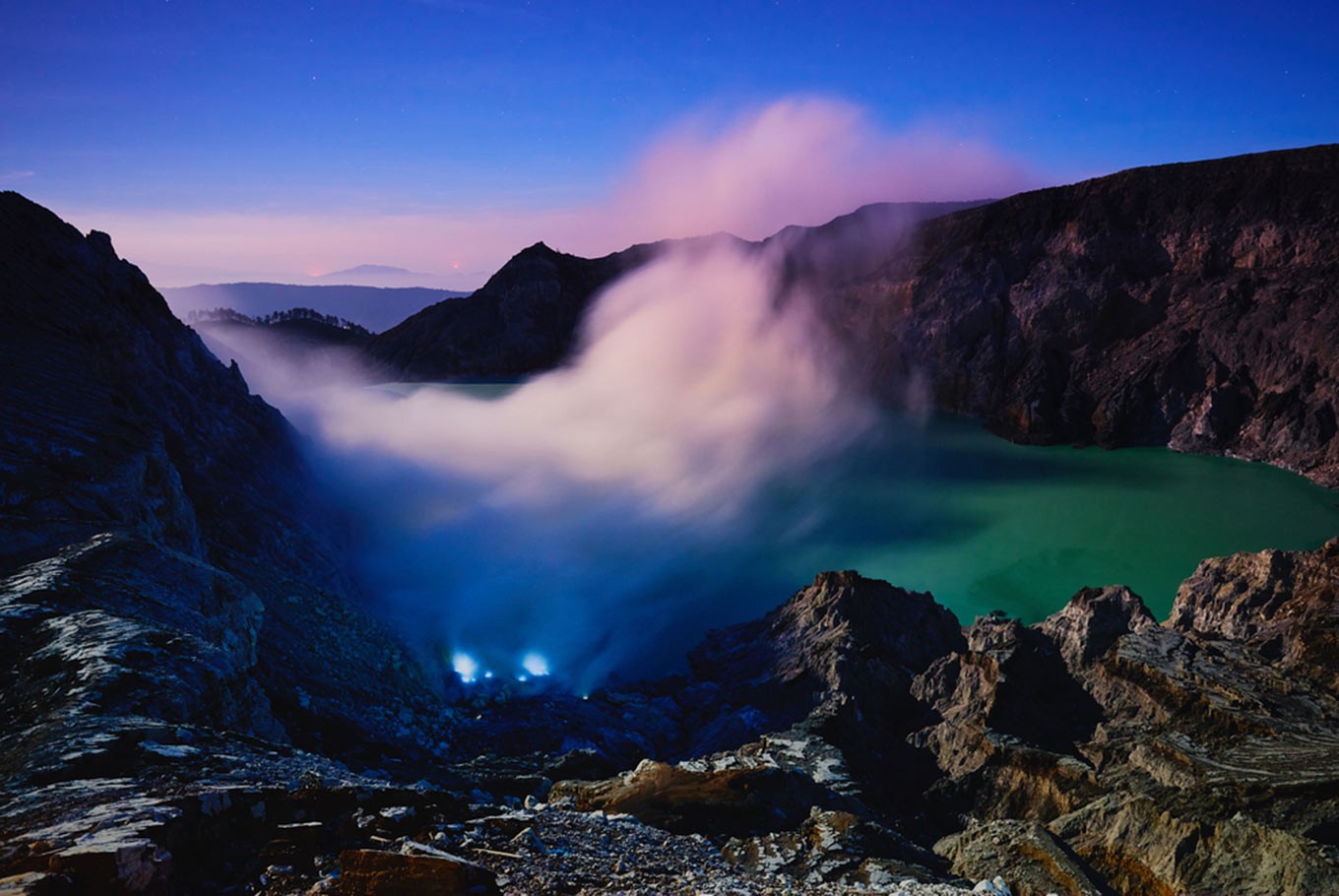 Another Indonesia best mountains in East Java that has a spectacular view is Mount Ijen. The mountain stands among three regencies in East Java, which are Banyuwangi, Situbondo and Bondowoso. However, this mountain climbing post is in Paltuding Village, Banyuwangi.

Indeed, the Ijen Volcano is very famous for its blue fire. A rare natural phenomenon that only happens in two areas in the world. This comes from sulfur liquid which is traditionally mined by the people around Mount Ijen. To enjoy the beauty of the blue fire you can climb Mount Ijen at night and it will take about 2,5-3 hours walking before reaching to the crater. 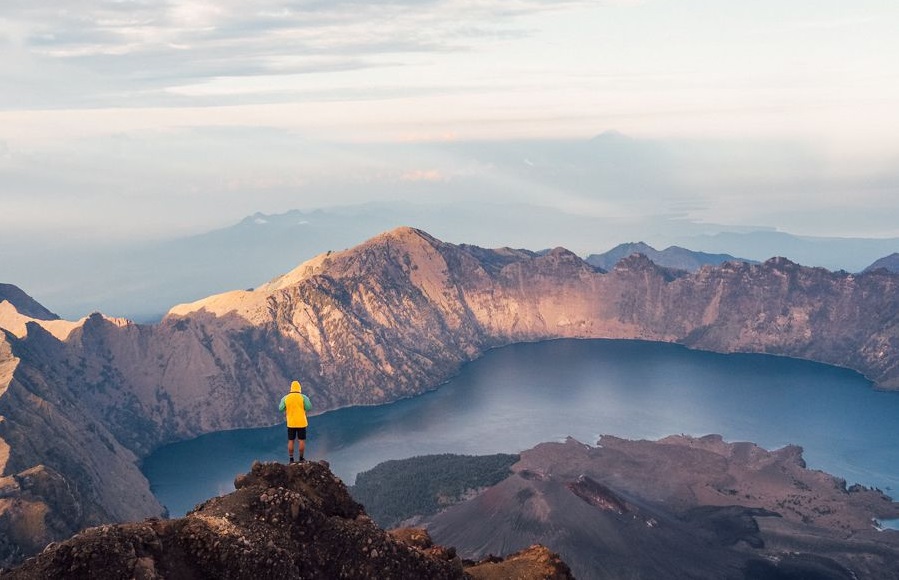 Besides having super beautiful beaches that make tourists unwilling to go home, Lombok Island in West Nusa Tenggara Province has other phenomenal attraction that makes many tourists fall in love. It is the Mount Rinjani. This mountain is often referred  as the best trekking tour in Southeast Asia. If you ever experience the Rinjani trekking activity and see the beauty of it directly with your own eyes, of course you will agree with that opinion.

Rinjani is a perfect mountain. It has a beautiful savanna overgrown by Edelweis and has a charming sunrise view as well. Of all the beauty Rinjani has, Segara Anak Lake is the most sought after. This lake  is located at 2,000 meters above sea level and is the most beautiful gem on Mount Rinjani. Other uniqness of Rinjani is the existence of Mount Barujari, located in the middle of Segara Anak Lake. Barujari is a mountain that stand on a mountain area so this mountain is often referred as the son of Rinjani. 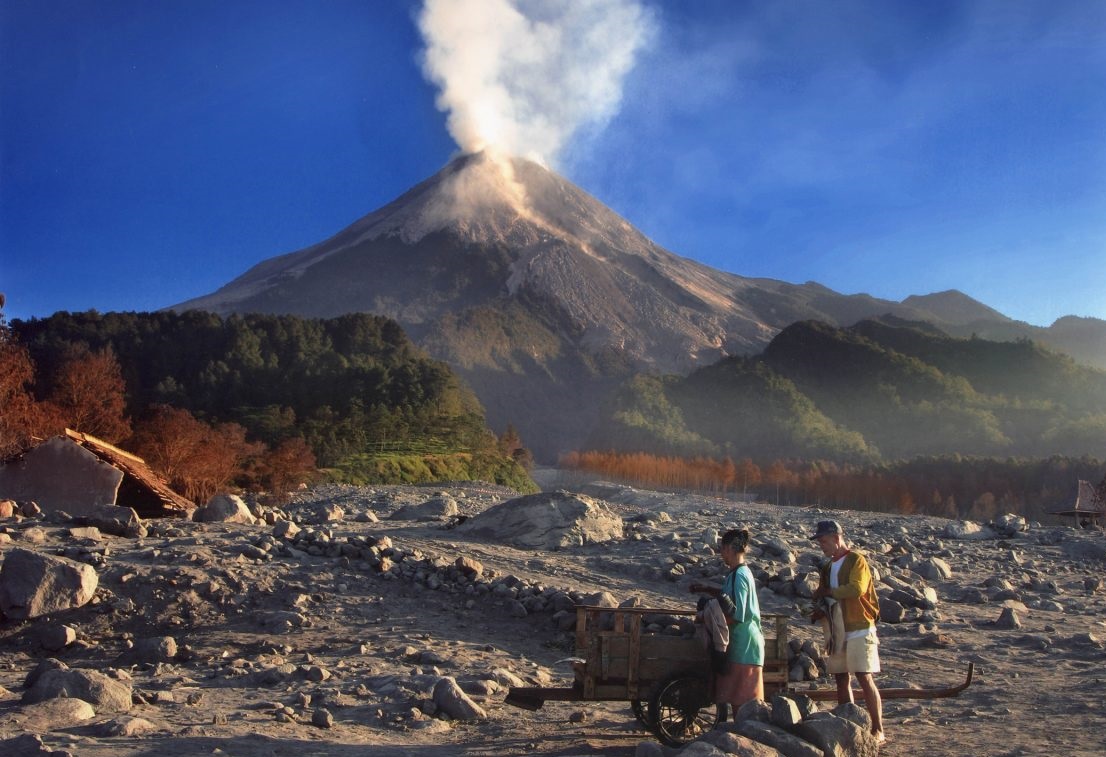 Merapi is a volcano located in the provinces of Central Java and Yogyakarta, which is still very active today. The location is quite close to the city of Yogyakarta and there are some villages on the slopes up to an altitude of 1700 meters. For the people living in this place, Merapi brings a blessing of sand material, while for the regional government, Merapi can bring tourists to the area. At this moment Merapi is part of Mount Merapi National Park area.

Mount Merapi itself is one of the mountains in Java area that is quite dangerous. Indeed, it is the most active volcano in Indonesia. Since 1548, this mountain has erupted 68 times.

Merapi is a popular climbing object because of the beautiful scenery. If this mountain is calm, you can climb to the top. There are three common paths for climbers, both for beginners and professionals, which are the Kinahrejo / Kaliadem Line from the south side, the Babadan Line through the western slope and the Selo / Plalangan Line from the north of Merapi peak. Make sure you have consulted  professionals before climbing the Mount Merapi. 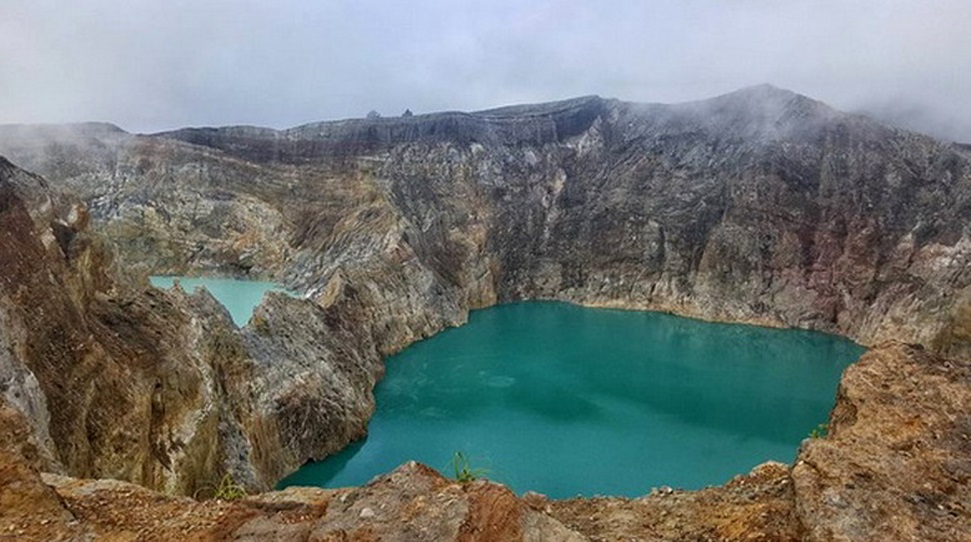 Ende Regency in East Nusa Tenggara Province has also a mountain with very charming scenery. The mountain name is Kelimutu. The height of Mount Kelimutu itself is only 1,639 meters above sea level but the scenery offered is really amazing. Climbing this mountain can take up to 6 hours.

At the top of this mountain there are three lakes known as the Three Colors Lake because each water in the lake has different colors. The color of the water in the lake sometimes also changes over time. The three lakes have their own names which are Tiwu Nuwa Muri Koo Fai (blue lake), Tiwu Ata Polo (red lake) and Tiwu Ata Mbupu (white lake). 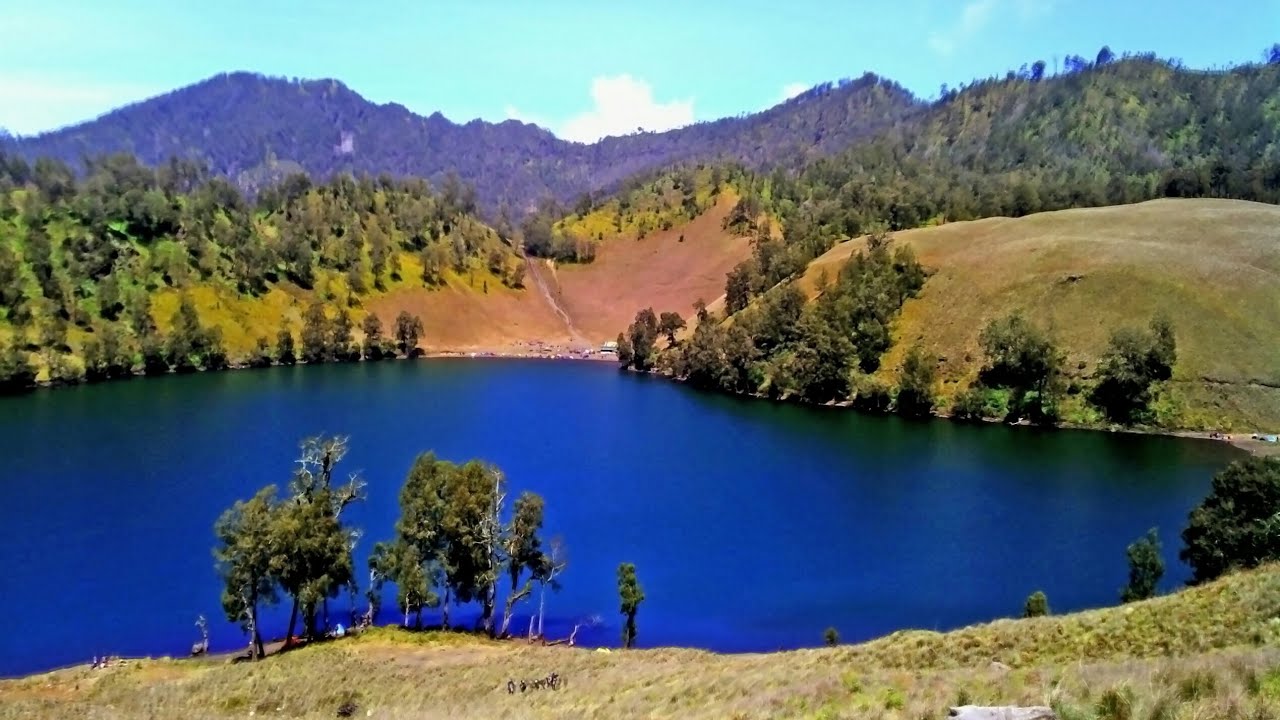 Semeru is one of the most beautiful mountains and the highest one in Java. Mount Semeru has a height of 3,676 meters above sea level and is also known as Mahameru or Mount Agung. It has been a legend for a long time. The beauty of this mountain is speechless. Its beauty has also attracted many climbers from all around the world. Semeru is one of the busiest mountains in Indonesia. The maximum climbing quota is only 1000 person per day, makes climbers sometimes have to queue at Ranu Pani.

Same like Rinjani, Mount Semeru also has a super beautiful lake of Ranu Kumbolo. This natural lake located at an altitude of 2,400 meters above the sea level. Live of the flora in Semeru is vary but most are dominated by pine trees, acacia and jamuju. There are also Edelweis and endemic orchids that can be found around the Semeru summit. 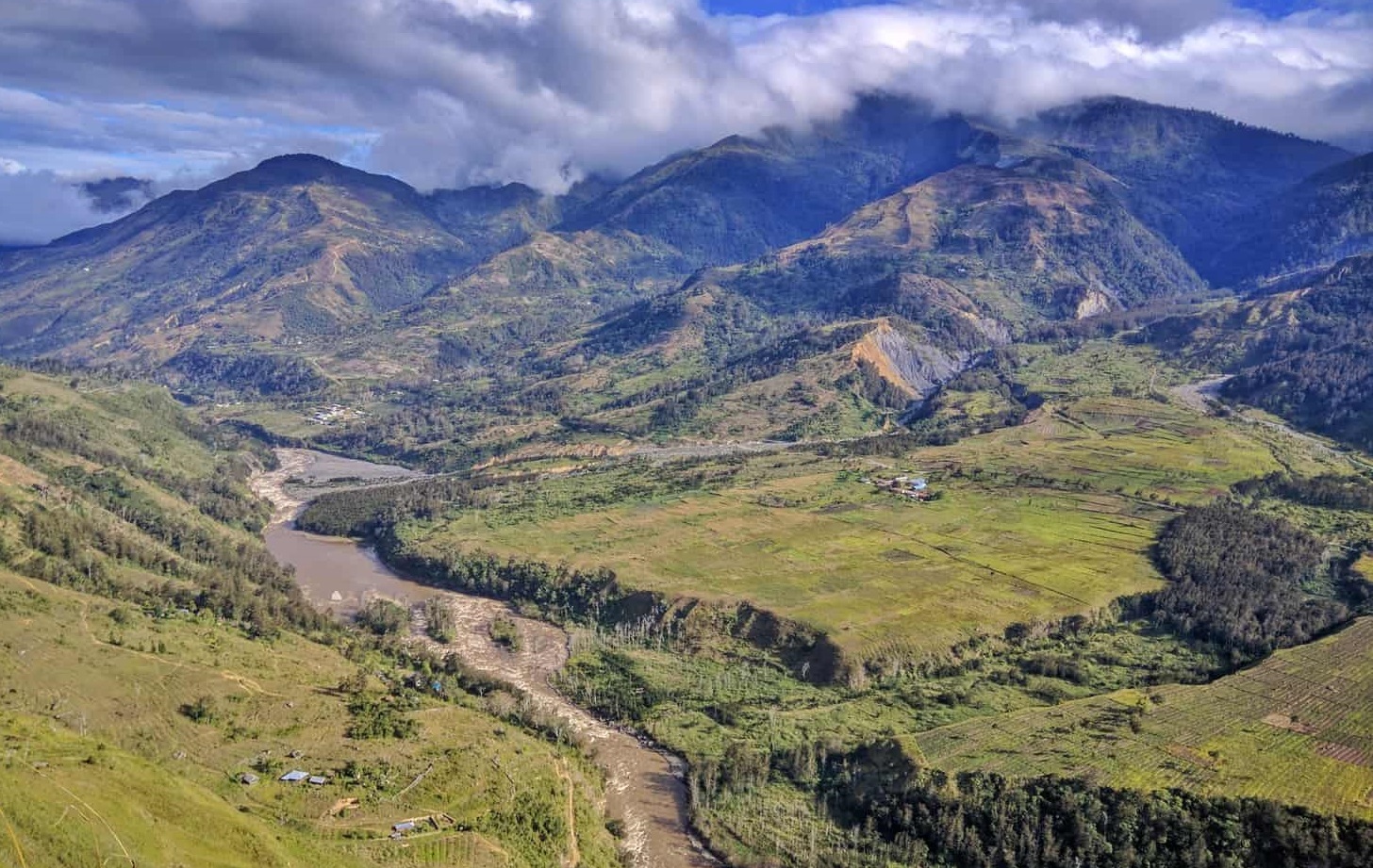 The Baliem Valley is a hidden tourist destination that stretches in the Jayawijaya Mountains region, West Papua. It is situated at an altitude of 1,600 meters above sea level and inhabited by the Dani, Yali and Lani tribes.

Expedition to Baliem Valley you will be presented with green hills which is very beautiful with its natural scenery. Although located on a highland, the Baliem Valley is covered with charming white sand. The white sand texture is exactly the same as the sand on the beach and even feels salty. The green shrubs that guard it makes the sand color more striking and amazing.

Having a length of about 80 kilometers and a width of 20 kilometers, this valley is cut by the Baliem River which flows into the Grand Valley and disembogue into the Arafura Sea. 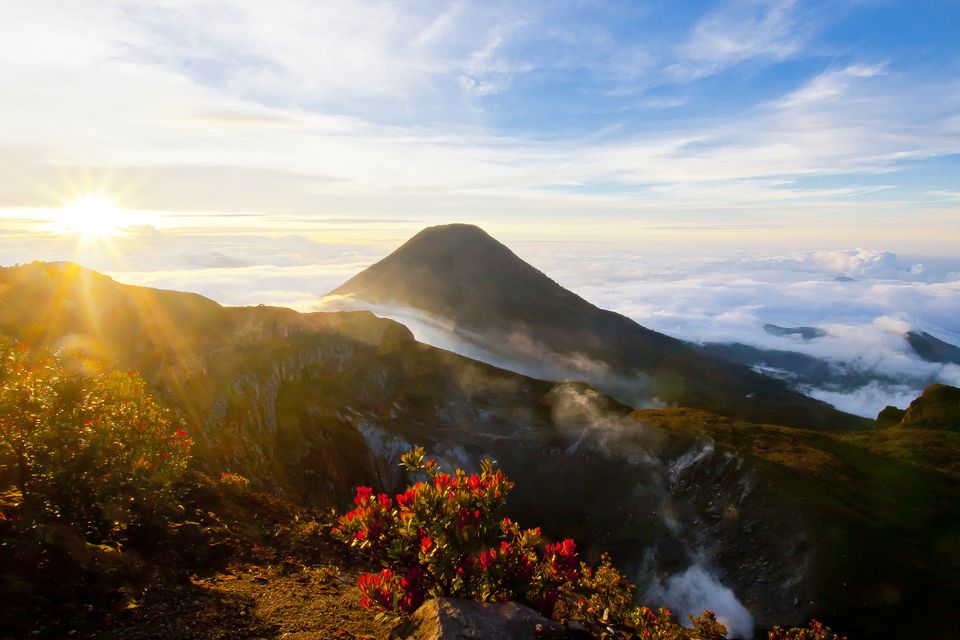 Mount Gede is one of the most “crowded” mountains in West Java. The reason is of course for the beautiful scenery it has. The most beautiful spot in Gunung Gede is the Suryakencana Square. This place is a meadow filled with edelweiss flowers. The square is situated at an altitude of 2,750 meters above sea level.

Gunung Gede itself is located in the Gunung Gede Pangrango National Park area. Other than Mount Gede, in this national park area there is also another mountain called Mount Pangrango which also has a meadow filled with Edelweiss Flowers. The spot name is Mandalawangi. 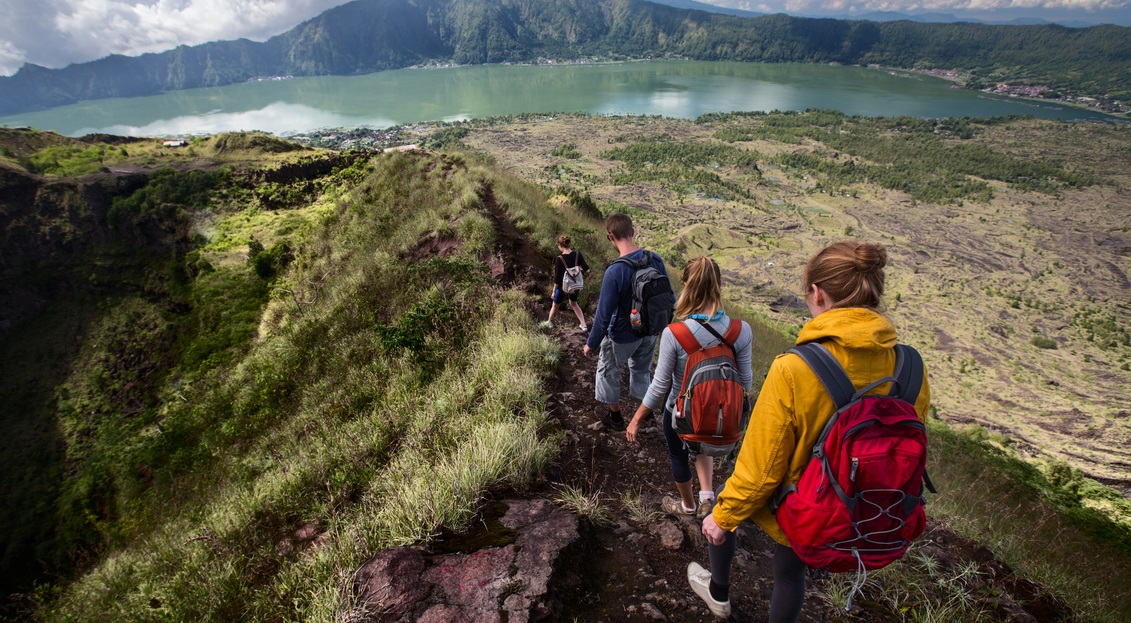 Another Indonesia best mountains is Mount Batur, an active volcano located in Kintamani District, Bangli Regency, Bali. Situated in northwest part of Mount Agung, the mountain has a caldera measuring about 13.8 x 10 km and it is one of the largest and the most beautiful in the world. Inside the caldera there is a crescent-shaped lake called the Lake Batur. Batur Mountain is the second highest mountain in Bali after Mount Agung. It has an altitude of 1717 meters above sea level.

If you are strong enough to climb, you should try going to the top of Mount Batur. From the top, you can view some beautiful sceneries. Starting from the romantic colors of the morning sun, the green trees in the mountains surrounding the vast stretch of Mount Batur caldera and the blue waters of Lake Batur. Cool mountain atmosphere will make your journey moments even more unforgettable.